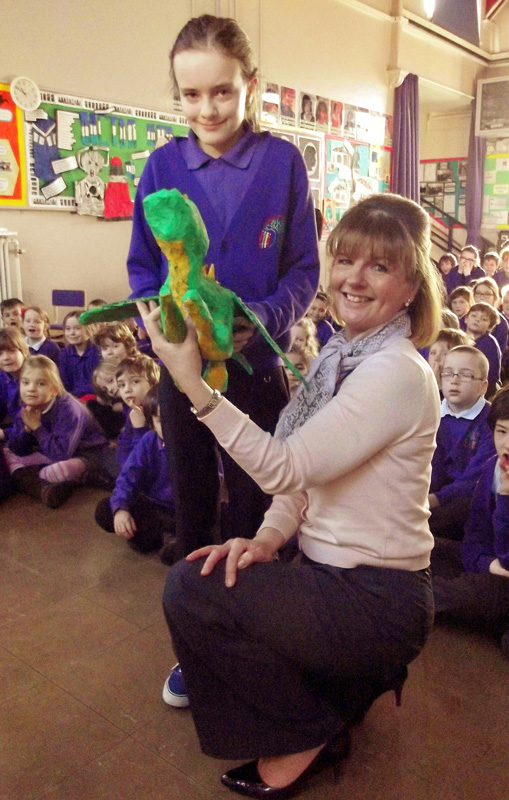 More than 40 dragons, created by children from Magdalen Gates primary school, have been on display at the Maids Head Hotel in Norwich since Friday, February 7 2014. Visitors to the hotel have been invited to vote for their favourite dragon.

The winner of the first week’s prize, a family carvery lunch, is Ruby Pummell. Deborah Cubbin, Sales Manager at the Maids Head visited the school to present Ruby with her prize just before half term.

The dragons will remain on display at the hotel until Sunday, February 23 2014, and visitors are asked to continue voting for their favourite. A second prize will be presented after half term, afternoon tea for one young dragon maker and their family.

The dragon-making project is part of Norwich Dragon Festival www.heritagecity.org/dragonfestival. The hotel also has a special Little Dragon’s Menu throughout the festival.

Christine Malcolm, General Manager of the Maids Head Hotel said: “Our dragon-making competition with Magdalen Gates Primary School is the first project in a new partnership with the school. The dragons make a very colourful addition to our reception and lounge areas. I do hope that visitors continue to vote for their favourite until the end of the festival.”

Hannah Collinson, Acting Deputy Head Teacher at Magdalen Gates primary school said: “Designing and making the dragons has been an exciting project for the children; creativity is an important part of the curriculum. It was wonderful for them to visit the hotel last Friday, meet the Lord Mayor and find out about such an important historic building in our local community.”