Dave Lewis (London) and Gigi Scaria (New Delhi), two of the artists featured in the Sainsbury Centre’s current exhibition, AfterShock: Conflict, Violence and Resolution in Contemporary Art, have completed a two-week project working with immigrants in Norwich. Using film and photography they have explored how the multicultural blend is developing in the city.

The finished film is being shown as part of Aftershock, which runs until September 2. Visitors should contact the Sainsbury Centre in advance to check screening times, tel 01603 593199.

The intervention is part of a much broader education and research programme at the Sainsbury Centre. 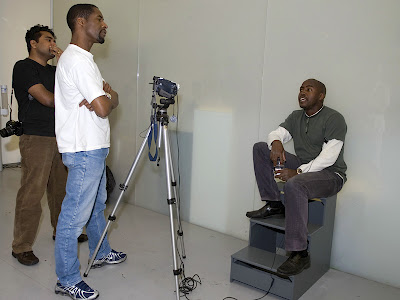 Dave Lewis and Gigi Scaria interviewed Norwich residents representing several nationalities including Democratic Republic of Congo, The Philippines, South Africa, Spain, Uruguay, and the West Indies. Their questions delved into the interviewees’ experiences as strangers in a new urban environment. Junior Campbell from Barbados and Abraham, who has an Ethiopian background, were two of the interviewees.

Junior Campbell moved to Norwich with his wife and small daughter a year ago. His wife comes from Suffolk and wanted to be close to her family with their young child. “We looked at London, but the rents were horrendous. I was also concerned about stories of black on black violence in the capital,” said Junior Campbell. “I have no regrets about moving to Norwich and have been warmly welcomed. However I have had one or two comments that have made me doubt the extent of the welcome. There seems to be ambivalence, an undercurrent that causes you to wonder. I think a lot about differences and am committed to celebrating those differences.”

Abraham came to Norwich in 1989 to go to UEA and stayed on in the city. “Norwich is not one of the most multicultural places, but it has changed enormously over the last 10 years. The city also has a long history of diversity. There is a perception that Norwich is the last white city and Norfolk is the last white county, but I do not think that the people here view themselves in this way. Racism and xenophobia exist everywhere. If you are part of a visible minority then those who want to target you will target you. But Norwich was very welcoming to me. The city has a great future for developing a cohesive multicultural community. We have no ‘ghettos’. People of all nationalities live side by side. My belief is that we are all one race with different colours.”

Gigi Scaria said: “Our intervention has provided a marvellous opportunity to learn about another city and gather personal insights for our film, to show how we all contribute in different ways to the human existence. This anthropological take really interests me.”

Dave Lewis said: “I have found like-minded people here. We are all made different by race, class and gender. We need to look at ourselves within our ‘small environment’ to work out our real prejudices then deal with them. Everyone has an identity. There is nothing wrong with appreciating British culture, but not at the expense of other cultures.”

Veronica Sekules, Head of Education and Research, the Sainsbury Centre concluded. “Reaching out and exploring diversity in the local community is an important new area of work for us, as we relate it to our wonderfully diverse art collections. We will use Gigi and Dave’s film to open up more conversations with residents of all nationalities. We also want to develop stronger links with the people involved in their project.”

Two more artists, Jitish and Reena Kallat, will also be doing an intervention between 25 and 31 August in the Sainsbury Centre Studio.

Jitish and Reena want to work with children and families making ‘creative camouflage’ from everyday items such as bottles of water and toothpaste that have become ‘weaponised’ in the context of ‘anti-terror’ security.

Visitors to the centre will be able to drop-in and take part free of charge.

Dave and Gigi, two of the 16 international artists featured in the AfterShock exhibition at the Sainsbury Centre for Visual Arts, made ‘Working Progress’ during their artists’ intervention in Norwich from July 14th to 26th. This extract shows one of the interviews Gigi and Dave conducted with a range of people from different communities who have made Norwich their home. AfterShock is funded by the Arts Council of England. The artists’ interventions received additional funding from Contemporary Art Norwich 2007