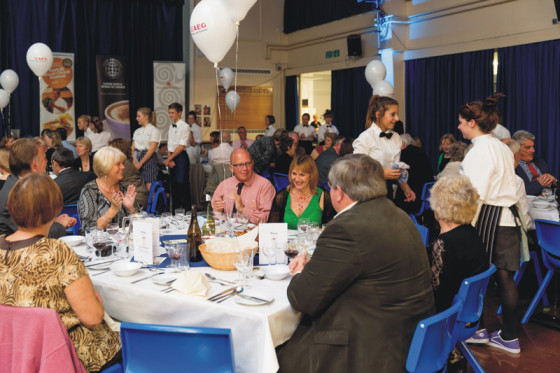 The Festival Gala Dinner at Aylsham High School, cooked and served to over 100 guests

From Breakfast to Dinner, from workshops to demonstrations to musical entertainment and markets, this year’s Aylsham Food Festival, organised by Slow Food Aylsham, had everything for those who enjoy their food with a light-hearted touch!

Taking full advantage of the impressive Mobile Cooking Academy, on loan from Festival sponsors AEG and temporarily sited at Blickling Hall, the weekend got off to a flying start with a series of workshops for groups of young children from local primary schools.  On hand to help were Justin Gardner, catering manager at the Hall, plus Liz Scott in the costume of Cath, her scullery maid alter ego.  Liz returned the following day, together with two other Blickling Hall volunteers, Bunty Stotts – aka Flo the Cook and Malcolm Bird, ‘The Butler’ who staged a workshop for students from Aylsham High School. The three were followed by local chefs Steve Thorpe, Festival Patron and Head of School at City College Norwich; freelance Derrol Waller; Mark Sayers from the Saracen’s Head and Richard Baker from Aylsham’s Market Place Bistro. Together they produced a series of demonstration sessions for a ‘drop-in’ audience, cooking up some fabulous dishes which the audience were invited to taste. The demonstrations continued the following day with a return of Steve Thorpe and Derrol Waller, joined by Steve Norgate from The Beechwood in North Walsham and, fresh from directing the previous night’s Gala Dinner, Jason Baxter, head of Hospitality & Catering at the High School. Blickling Hall’s Catering Manager, Justin Gardner was also on hand, and together with Derrol Waller, took part in a lively Ready, Steady, Cook competition.

The Festival Gala Dinner occupied its traditional Friday evening slot when over 100 students at Aylsham High School cooked and served a 5-course meal for more than 100 guests. Guest speaker Steve Thorpe, Festival patron and Head of the Hotel School at City College Norwich, praised the youngsters for producing a superb meal of the highest standard. 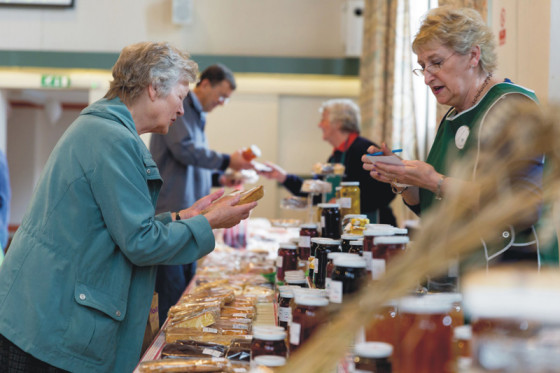 Aylsham Food Festival includes two food markets, the first on Friday morning, Aylsham Country Market, is a cooperative of local home-based producers who offer a range of cakes, biscuits, savouries, vegetables and eggs in addition to a selection of craft goods. Aylsham’s FARMA-accredited Farmers Market, held every first and third Saturday of the month, enjoyed a very busy day, extending its hours to take in performances by junk percussion duo, Bang On!  The duo, who use ‘instruments’ ranging from wheelie bins to plastic pop bottles, invited everyone to join in their irresistibly rhythmic workshops which were followed by a grand finale performance in Aylsham Market Place, featuring some 80 members of the public. 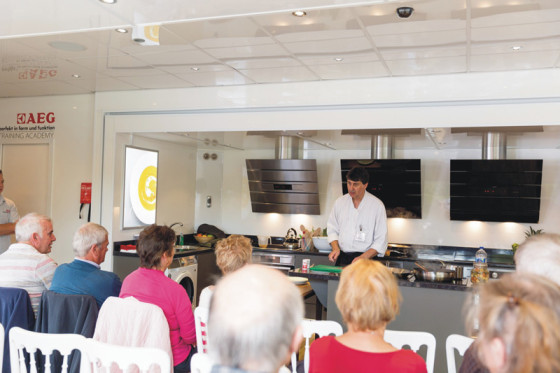 Family Cooking Workshops were another attraction on Festival Saturday, bringing over 50 children into Aylsham Town Hall, where they were able to make Spring Rolls and exotic ‘Tutti Fruiti Crumble’ to take home with them.

The Big Slow Breakfast has always rounded off Aylsham Food Festival and 2013 was no exception.  Serving also as the final event in the 5-week Norfolk Food & Drink Festival, the Breakfast saw 120 people sit down to enjoy sausages and bacon from Aylsham’s three butchers, eggs, tomatoes and mushrooms from Salad Days fruit & veg, croissants from Pye Bakers and homemade bread courtesy of Slow Food Aylsham members.

Summing up the 2013 Food Festival, Slow Food Aylsham’s Roger Willis said, “Pulling together all the different elements of this year’s Festival has been a challenging experience, particularly as, for the first time, we were operating from two venues, Aylsham and Blickling. But thanks to the exceptional efforts of all Slow Food Aylsham members, plus back-up from principal sponsors, AEG and J B Postle, and our other supporters, I think we have pulled off the best Festival to date. The Cooking Academy vehicle has been a major success, while I think everyone agreed that the Dinner at the High School scaled new heights of excellence. Add in the very popular Bang On! who set the Market Place alight on Saturday, the Kids Cooking Workshops, two very successful markets and the sold-out Breakfast, and I think we can say that we are very satisfied with the result of our efforts.

“Aylsham Food Festival is organised entirely by volunteers from a not-for-profit organisation which I think makes the success all the more remarkable.  All we have to do now is decide how we can at least equal that success in 2014!” 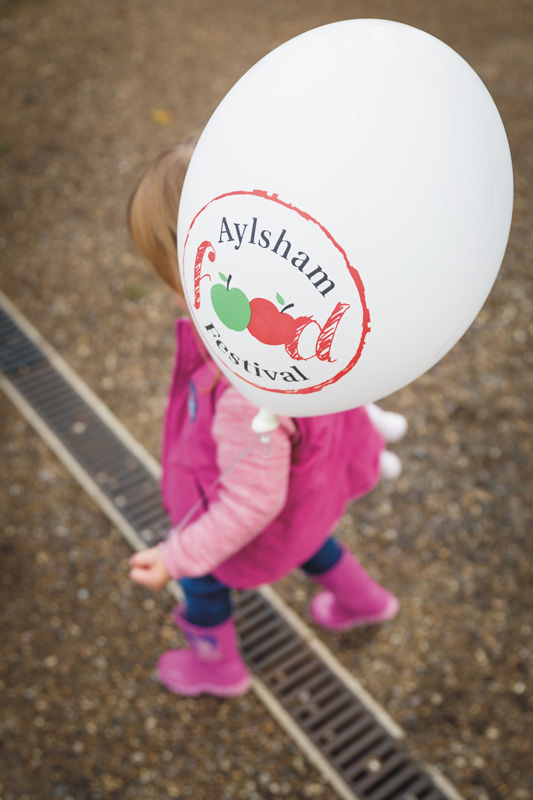 If you would like to join Slow Food Aylsham and get involved in the organisation of the next Festival, email [email protected] for details.