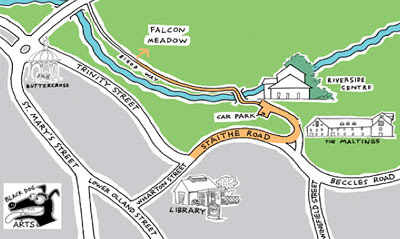 This exhibition is FREE

Don’t miss Black Dog Arts “Fieldful of Farm Animals” down by the riverside, indoors in the Riverside Centre and outdoors in Falcon Meadow, Bungay Staithe, this Saturday and Sunday from 11am to 3pm both days.

The exhibition is free and it is best to start indoors in the Riverside Centre, which has free parking right outside.

On show indoors are Katarzyna Coleman’s black and white cow painting “Io”, Jan Dungey’s black and white drawing of goats in Westhall, Nicky Stainton’s painting of Meens Farm’s Southdown sheep, and John Pitts “Snippets”, which is a collection of drawings and paintings of a number of different farm animals.

Indoors, in the Riverside Centre, there will also be some smaller farm animal paintings on show and postcards of the works will be on sale.

Visitors will also be able to read about the artists and the works.

So, start at the Riverside Centre then go outdoors, across the bridge over the River Waveney into Falcon Meadow.

Once in Falcon Meadow you will not be able to miss the ten huge paintings on show on straw bails in the meadow itself.

“Falcon Meadow is one of Bungay’s best kept secrets”, says Jan Dungey from Black Dog Arts. “The footpath through Falcon Meadow follows the river to the bridge at the bottom of Bridge St. As you walk along the path you can see the backs of some beautiful Bungay houses. It really is a treat – a stunning little stroll! And the “Fieldful of Farm Animals” is probably the only exhibition around that you can enjoy while you are out walking your dog! The path is also wheelchair accessible, with assistance.”

The paintings on show feature all different kinds of farm animals but pigs seem to be popular this year and four pig paintings will be on show. 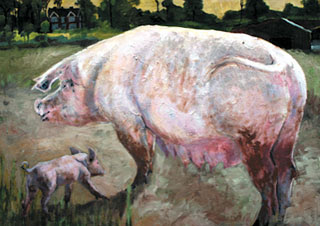 These three paintings are realistic whereas John Pitts “Pigs Flight” is a fantasy picture inspired by the expression “pigs might fly”.

Then there are three chick pics!

One by Marlene Jervis is of the chicken roundabout chickens!

The other two by Hilary Mullock and Nicky Stainton are inspired by chickens to be found in Meens Farm in the Saints.

Also to be found in Meens Farm are the Irish Moiland cattle that inspired one of Noelle Francis paintings. 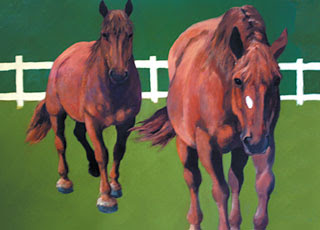 The final two paintings on show outdoors are of working horses to be found in Gressenhall Farm and Workhouse near Dereham.

So, pack up a picnic, pick up your friends and relations, your children or grandchildren, follow Black Dog Arts pointing dog signs (see below), and make your way to Bungay Staithe this weekend.

Where else can you take the family for a free day out and see fine art for free?

For more information about the exhibition or Black Dog Arts ring Jan on Bungay 895227.