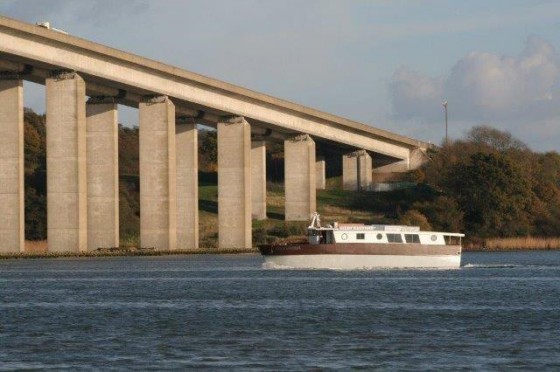 Well-known Suffolk businessman, Bob Feltwell, past Chief Executive of Suffolk Chamber for many years, had his 60th birthday on the Lady Florence River Cruise Restaurant from Orford ten years ago. This year he chose sister ship, Allen Gardiner, to celebrate his 70th birthday with his family on her inaugural maiden voyage from Ipswich.

Bob became Chair of Governors at the Otley Campus of Easton and Otley College. He now has a building at the College named after him. The ‘Bob Feltwell’ centre for animal management has been created to support learners on animal courses at the college and is part of a long-term investment programme that will improve land-based facilities at both college campuses situated in Norfolk and Suffolk.

Bob has also been a key figure at the Museum of East Anglian Life at Stowmarket.

The Lady Florence River Cruise Restaurant business has now consolidated in Suffolk, by moving its Allen Gardiner boat from Durban Harbour in South Africa to Ipswich. Operating from the waterfront’s Ipswich Marina in the Wet Dock, she cruises the River Orwell down to the Port of Felixstowe, whilst serving fine food from an a la carte menu.

The Allen Gardiner was built in 1942 in Florida, USA for the South African Air Force (SAAF) as an air/sea rescue launch, so is two years older than Lady Florence, and therefore 72 years old this year. She was one of twenty air/sea rescue launches operated by the SAAF during World War ll, but has been in the tourism industry in Durban for over forty years. In 2011 she underwent a virtual rebuild, so is now a gracious old lady.

In Durban she cruised with twenty passengers sat at table in the dining saloon, but catered for thirty to forty for fork buffet meals. Today, in Ipswich, she operates with only twelve passengers on an Ipswich Borough Council licence, until such time she obtains her Maritime and Coastguard Agency (MCA) licence for greater numbers. She can accommodate twenty passengers at table, but only by remaining at her berth and not cruising the river. However, her berth is right at the Prince Philip Lock, within full view of the frequent river and sea-going traffic that enters and leaves the Wet Dock. The Allen Gardiner has large picture windows, so you will be fascinated by the views of the historic Ipswich waterfront and the lock whilst seated at table.

The Durban experience caused us to create a very different menu to Lady Florence, and many of the South African dishes have been incorporated into the Ipswich menu. You will be intrigued by “bunny chow”, normally eaten walking down the street with it in your hands. Has nothing to do with rabbits, by the way.  A special treat is the Malva pudding, of South African origin, but really from the Cape.  A light sponge with a sauce of melted butter, with cream and brandy  poured over the sponge whilst still hot so it is fully absorbed. Delicious!

Cruises for twelve passengers leave the Wet Dock through the lock, and you will enjoy passing through the port of Ipswich, with its grain and timber terminals and the roll-on roll-off (roro) vehicle ferry terminal. Passing under the impressive Orwell  A14 Road Bridge, dockland gives way to one of the prettiest river shorelines in Eastern England. You will pass marinas at Woolverstone and Levington, the Royal Harwich Yacht Club, picturesque Pin Mill, ultimately turning for home at the Port of Felixstowe, the largest container terminal in Britain. This is opposite the old HMS Ganges Naval Training School at Shotley and also Harwich Pier and Parkeston Quay.

Allen Gardiner has connotations not only with Durban but also with the Royal Navy. Following his career as a Captain with the Royal Navy, he became a missionary. He sailed to Port Natal in February 1835, eleven years after the first white settlement there. His mission was to convert Dingaan, King of the Zulus, to Christianity. Dingaan only wanted guns, so Allen Gardiner returned disconsolate to Port Natal to sail home.  However, the 17 white settlers persuaded him to stay at Port Natal and set up a mission station. He did this on the ridge behind the settlement, and named the area “Berea”. This was a reference to St Paul’s travels in Greece, recorded in the Acts of the Apostles Chapter 17. Paul was rejected by the Thessalonicans so moved on to the next village, Berea, where he was welcomed with open arms. The parallel is obvious.

He called the first public meeting at Port Natal in June 1835, with all 17 settlers present. At that meeting, they planned a new township, where the City Hall is today, and named it D’Urban after the then Governor of the Cape, Sir Benjamin D’Urban, thus renaming Port Natal as Durban.

Allen Gardiner brings a taste of South Africa to Ipswich, where you, like Bob Feltwell and his family, will enjoy the standards you have become accustomed to aboard the Lady Florence, whilst cruising a very different river on a very different historic boat, right out of the town centre of Ipswich.

Can we DRAW you in?