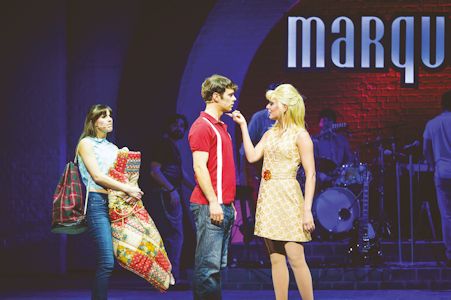 Carnaby Street, a brand new musical from the director of Dreamboats & Petticoats opens at Lowestoft’s Marina Theatre on Monday – marking a regional premiere for the show packed full of iconic 60s hits.

Set against the background of swinging London, the musical – one of the biggest ever to be presented at the Marina – tells the story of Jude, a singer/songwriter who travels down from Liverpool with his best friend Penny Lane, in search of fame and fortune.

A chance encounter with man-about-town Jack leads to Jude joining a band at The Marquee Club and with Jack acting as their hopelessly inexperienced manager, they try to make it big in the exploding pop/rock scene of the time.

Featuring a large cast of dancers, singers and full live band, Carnaby Street includes over 30 hit songs including Twist & Shout, Born To Be Wild, I Only Want To Be With You, Doo Wah Diddy Diddy & Downtown.

Some of the brightest stars from the West End appear in the production, lead by former Eastender Aaron Sidwell, Emmerdales’ Verity Rushforth and Buddy’s Mathew Wycliffe. Verity played the role of Donna Windsor in Emmerdale for over 11 years before making her West End debut as Penny Pingleton in Hairspray, other credits include Maria in the national tour of The Sound of Music and roles in The Seven Year Itch and Annie.

Aaron’s career began at 18 when he was cast in the BBC’s long running drama Eastenders playing the role of Steven Beale. His theatre credits have included Michael Dork in Loserville – The Musical , The Prodigals and  films  The Nephilim and Blood Army. Aaron also has a successful music career, and has toured with artist Professor Green.

Matthew has recently appeared as Bob Gaudio in the award winning Jersey Boys and received high praise for his portrayal of Buddy Holly in The Buddy Holly Story, a role in which he has toured all over the world.

Currently taking the country by storm, tickets are already in great demand for the production which is directed by Bob Tomson, the man behind a string of musical hits including Dreamboats & Petticoats & Blood Brothers.

Having presented the regional premieres of both Dreamboats & Petticoats and Save The Last Dance For Me, management at the Marina Theatre are promising this latest major production will be just as much fun for audiences. Marina chief executive, Martin Halliday said,

“We have been working with the producers for over a year to bring another top musical to Lowestoft, we saw the production in London a few weeks ago and it really is absolutely superb with great music, comedy and dance, like the thousands of people that saw Dreamboats & Petticoats and Save The Last Dance For Me at the Marina, we wondered just how we could top those fabulous shows and with Carnaby Street we definitely have – If you loved Dreamboats & Petticoats you will absolutely adore this!”