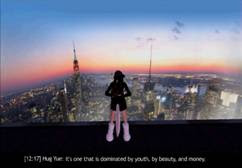 China China China!!! is a major exhibition which features 18 contemporary Chinese artists whose work has not been constrained by the rapid expansion in demand for Chinese art in recent years. The exhibition opens at the Sainsbury Centre for Visual Arts, University of East Anglia, Norwich, on Tuesday 10 February and runs until Sunday 3 May.

“This is very different to other exhibitions about Chinese contemporary art. The works are intimate and practical with a strong story to tell. I hope that the visitors to the exhibition will become more curious about global culture, will consider that Chinese culture is relevant to their lives and will appreciate the artists as human beings, responding to the world around them.”
– Li Zhenhua, Co-Curator, China, China, China!!!

The three curators have collaborated for 10 years and their artistic development is fully documented in the exhibition. The chosen artists have produced work that is radical, critical and often playful, which is rooted in their local context, but also participates in the international art arena. The result is a collection of fascinating and uncompromising works that give new depth to our understanding of what it means to live in a society going through immense change.

The curators are also including The Angel, a life-size sculpture by Sun Yuan and Peng Yu, from The Saatchi Gallery in London. This work did not feature in the Florence exhibition.

Davide Quadrio’s 40 + 4 Art is not enough, not enough! is a documentary mapping the complex reality of Shanghai’s artistic scene and reflects on the social relevance of contemporary art in the China of today. Quadrio interviewed 40 of the city’s major artists, asking a series of questions that were grouped by theme on a deck of cards. Themes discussed include the importance of the artist in modern Chinese society, the artist’s relationship with the public, and the influence of the international art market on artistic production.

“The resulting film, shown on four screens with English sub titles, appears to show the artists in discussion and challenges what we know in the West about Chinese art.”
– Davide Quadrio, Co-Curator, China, China, China!!!

“All the works demonstrate the energy or emotions of Chinese reality. This part of the exhibition, Throwing Dice, creates an environment in which the audience can feel the reality of China. I am not just talking about China geographically, but am also concerned about thousands of years of Chinese culture.”
– Zang Whei, Co-Curator, China, China, China!!!

Li Zhenhua Multi Archaeology, 1162-2162 Another Thousand Years. The theme of Li Zhenhua’s curatorial work is the search for common cultural roots between different populations, both between China and its neighbours and East and West. In Multi-Archaeology, Li Zhenhua and artists Qin Ga, Wu Ershan, Shen Shaomin and Zhao Liang examine cultural identity, demonstrating how individuals are moulded by constant change. The figure of Genghis Khan, founder of the Mongol Empire, is used as the symbol for communication between civilisations.

“We are delighted to be bringing China China China!!! to the UK this spring. After a period when China has been the constant focus of international attention, we are keen to reflect on the impact of this interest, and to offer a thought provoking show which does not simply feature artists whose work is in high demand in the West at present”
– Amanda Geitner, Head of Exhibitions, Sainsbury Centre for Visual Arts.