CONSTRUCTED 40 Years of the UEA Collection, the Sainsbury Centre

Constructed, the most extensive exhibition of the UEA Collection of Abstract and Constructivist Art, Architecture and Design, opens at the Sainsbury Centre for Visual Arts, University of East Anglia (UEA), Norwich, on Tuesday 1 July and runs until Sunday 14 December.

The collection, which was founded in 1968, features sculpture, painting, graphics and design, together with architectural models, stage sets and furniture. Works by David Bomberg, Marcel Breuer, Charles Eames, Le Corbusier and François Morellet will be amongst those on display.

The UEA collection was begun as a response to the modernity of the University of East Anglia’s architecture. In 1968, UEA was one of England’s ‘New Universities’ with a bold concrete campus designed by architect Denys Lasdun to reflect the ambitious inter-disciplinary approach of the young institution.

The UEA Collection was begun in 1968 with a grant of £10,000 from the University Council to form a collection of twentieth century art. The late Peter Lasko, founding art history professor at UEA and subsequently Director of the Courtauld Institute in London, was the founding honorary curator and worked with Alastair Grieve, a lecturer in art history, to identify works for the collection.

The UEA collection, which was moved to the Sainsbury Centre when it opened in 1978, has grown to over 400 objects. New acquisitions to the collection continue to be made; work generously gifted by Ian Tyson and Laura Castagno and work by Jean Spencer (acquired with the support MLA / V&A Purchase Grant Fund) will be on display in the 2008 exhibition. 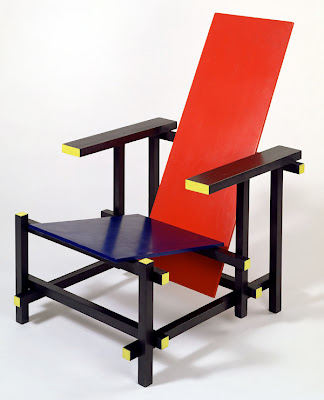 The earliest group of works in the exhibition date from between circa 1910 and 1930 and reflect the origins of a modern ‘movement’. Early exponents included artists and architects associated with the De Stijl Group such as Gerrit Rietveld and those associated with the Bauhaus in Germany such as Wassily Kandinsky (see Notes to Editors for more information).

Works in the 1910 – 1930 section of the show include a Le Corbusier chair and architectural model, a painting by Sonia Delaunay, the Pravda Tower model by the Vesnin brothers, Rietveld chairs, a charcoal drawing by David Bomberg and 2D works by Wassily Kandinsky and Lazlo Moholy-Nagy. Artists began making work now described as ‘constructivist’ in the second decade of the twentieth century.

The First World War and the creation of a new social order through the Revolution in Russia were instrumental in causing many artists to rethink how art and design shapes the way people live. A visual language of order and clarity drew some inspiration from other abstract movements but more importantly, embraced the possibilities presented by rapid technological development and engaged with other disciplines such as mathematics, science and architecture.

“The artists, architects and designers whose work has been chosen for the UEA Collection have a common concern to construct an ordered and rational environment appropriate for the modern world. An underlying theme in the collection is ‘Art and the Machine’, encapsulating the idea that artists strived to control and harmonise machine production”
– Veronica Sekules, Former Keeper of the University Art Collection and now Head of Education and Research at the Sainsbury Centre for Visual Arts.

The exhibition will also feature two other major groups of work. The first, includes a room setting with Isokon furniture, the work of émigré artists who came to England during the Second World War at the invitation of Isokon’s founder Jack Pritchard after the Nazis closed the Bauhaus. It includes furniture designed by the Bauhaus masters, Marcel Breuer and Walter Gropius.

The second is a group described as ‘The British Constructionists’, which includes artists such as Victor Pasmore, Mary and Kenneth Martin, Peter Lowe, Gillian Wise and Anthony Hill. Work of this type was also being made in Europe and further afield – examples by artists such as Jesus Raphael Soto and François Morellet will be on display.

The artists and designers in this section of the show are all interested in the links between art, mathematics and geometry and were inspired by the rapid development of technology. The works include striking 3D constructions, sculptures, reliefs and works on canvas that use a strong simple palette of colours, clean lines and geometric shapes.