Cromer Fireworks: A dazzler of a display (that was worth the wait) 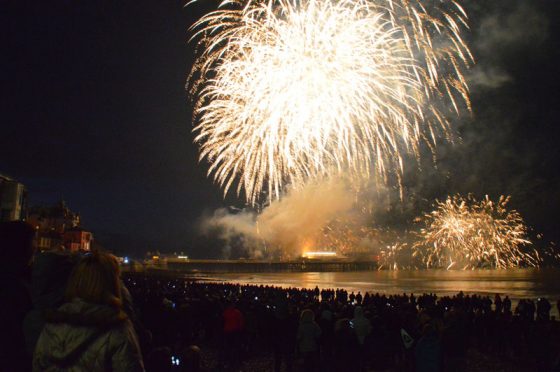 Crowds of locals and visitors enjoyed a dazzling and spectacular start to welcome in the New Year in Cromer – one week later than planned.

The annual New Year’s Day Fireworks display – the biggest in the country – was postponed a week due to adverse weather conditions on January 1st.

The breathtaking display saw over 2,400 fireworks launched off Cromer Pier and out to sea in a show that was well worth the wait and attracted people from far and wide to the town on a still winter’s day.

Spectators lined the cliff tops and promenade to watch the 14-minute extravaganza explode in the skies and on the surface of the sea.

Thousands of fireworks produced 27 sequences in the display – all preceded by a single green shell to mark the eve of the 100th anniversary of one of Cromer Lifeboat’s most famous rescues which took place on January, 9 1917 – that of the Fernebo.

On that day in 1917 a green rocket was fired to mark the end of what had been a tumultuous day.

Cromer Mayor Tim Adams said: “We’ve had a fantastic evening, with a lot of visitors from as far afield as Cambridgeshire.

“People have come a long way to see the display, it’s a calendar event for some people and they come every year.”

Director of Titanium Fireworks, Simon Page, said: “We are incredibly proud to have fired the display this year.

“It all went to plan and we’re very pleased to get the show we wanted to do on New Year’s Day up today.

“Cromer Pier is a unique setting, it is in good condition which means we can be quite creative and we’re already thinking about new ideas for 2018. It’s all about trying to make the most of the architecture of the pier, it’s a great shape to work with.”

“Some of the 150 displays we fire each year are work but others unbridle our creativity and we relish the challenges and opportunities of firing from an iconic structure like Cromer Pier.

“Chairman of the Fireworks committee Jim Bond said: “It was again, better than ever, it continues to wow year-on-year.

“The weather was perfect so we got patterns of smoke in the air too.

“The display makes the most of this unique setting and has drawn lots of excited and complimentary comments.

“The hard work put in by the many volunteers, and the co-operation of many local services and businesses makes this a particularly satisfying event.

“Local attractions and traders opened up their shops, eateries, museums and businesses on the day.

After the show, people took to social media to share their thoughts on the display with one visitor saying ‘Cromer’s delayed New Year fireworks were worth the wait’, with another saying ‘Gorgeous firework bouquet tonight over Cromer pier, good things come to those who wait’, another said ‘Well worth a 300 mile round trip for’.

Crowds donated a total of just over £8,000 to the event’s bucket collection which will be split between funding next year’s display and a grant fund for local Cromer charities to apply to.

Mr Bond said: “The committee are extremely pleased with the amount raised and would like to thank everyone for their support.”

For the fifth year running the organisers are running a Photography Compeition which is open to all non-professional photographers who attended the event.

Did you take a photo of the fireworks on the day?

If so, you have until midday on Monday, January 16 2017 to enter your images.

The winner will have their image turned into the official poster for the 2018 New Year’s Day Firework event as well as use in other promotional material. Local electrical retailer Hughes Plus are also offering the winner the latest 43” HD TV.

Manager of Hughes in Cromer, Simon Morton said: “Once again it is a pleasure for us to support this amazing event in our town.

“The quality and quantity of entries increases each year and, hopefully many will be tempted to place their own entry for the first time.

“I would like to thank all the members and volunteers that help to make such an iconic and eagerly awaited Norfolk event a reality each year and attract so many visitors to sample the atmosphere Cromer has to offer.”

Chairman of the Fireworks committee Jim Bond said: “The annual New Year’s Day Fireworks have been capturing people’s imagination for eighteen years, every year we see hundreds of fabulous photographs of the event in the press and online. We are looking for photographs that really capture the spirit of the event.”