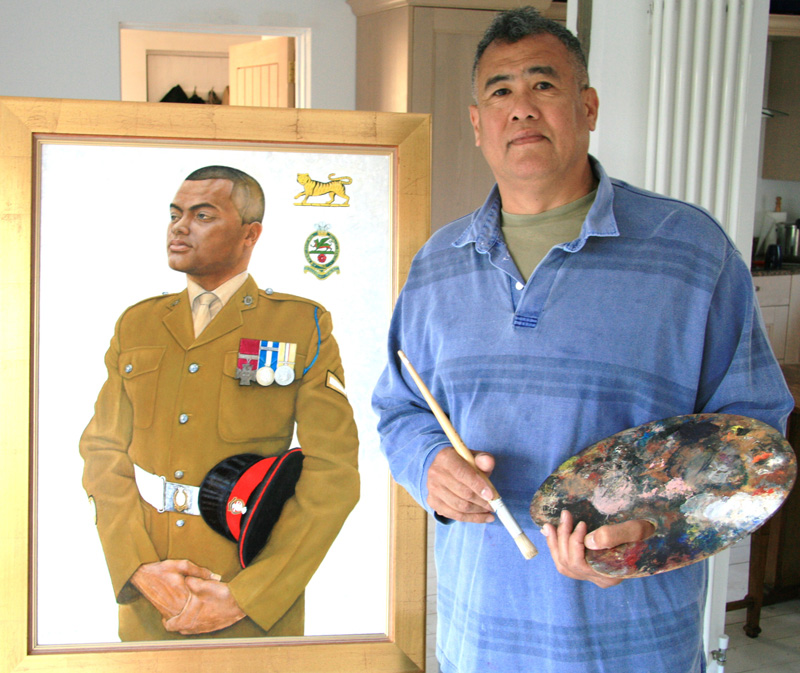 Danny Keen, Norfolk-based artist, who came to London from Jamaica in 1952 as one of the ‘Windrush generation’, is staging a 40-year retrospective exhibition at Anteros Arts Foundation, Fye Bridge Street, Norwich from 28 September to 3 November 2012.

The exhibition is open Monday to Saturday 10am to 5pm (free entry), as part of Norfolk Black History Month.

An accomplished jazz and blues pianist, Danny is also staging a series of concerts at Anteros celebrating Black History Month, including an appearance by Graham Dee who formed The Gas, an early 60s rock and soul outfit that was the first mixed race group in the UK.

Danny Keen studied fine art, graduating from London’s Central School of Art in 1970, before changing direction and embarked on a successful career in the catering and hospitality industries. He returned to painting full time in 1998, specialising in portraiture, particularly famous fellow West Indians.

His portrait of boxer James Oyebola, who died in 2007, the victim of gun crime, hangs in City Hall London. Danny has also created a series of portraits of Johnson Beharry, who was awarded the Victoria Cross in 2005 for his bravery in Iraq, the first to a living serviceman in more than 50 years.  Two of the portraits of L/Cpl Beharry are at the Imperial War Museum in London.

Danny’s portraits also include Mary Seacole, the 19th century Jamaican nurse, best-known for her work in the Crimean War, Tim Campbell, who won the first series of The Apprentice in 2005, Jon Chase science communicator and rapper and John Bird MBE, founder of the Big Issue. The portrait of John Bird will be shown for the first time in public at Anteros.

The retrospective at Anteros features psychedelic art from the 1960s, the Johnson Beharry series and other portraits, as well as more recent colourful abstract work, which connects with the 1960s paintings, but is also inspired by Danny’s lifetime interest in martial arts and his Shiatsu and Reiki healing practice.

Friday 12 October, 8pm, ticket £12: It’s a Gas! Gas! Gas!, singer songwriter, guitarist and record producer Graham Dee formed the rock and soul band The Gas in the early 60s, the first mixed race British group. During his carer, Graham worked alongside some of the all time greats of soul music. Norwich’s Dave Holgate Trio, supports Graham in a celebration of his extraordinary musical life.

Friday 19 October, 8pm, ticket £12: Sojourn in Rhythm, Caspar James, calypsonian and percussionist relives his years travelling in the Caribbean with a mix of Latino and Caribe sounds; ticket price includes at ‘taste’ of the Caribbean.

Friday 26 October, 8pm, ticket £12: Black History Month All Star Jam Session – Bring it and Jam It! All jazz musicians welcome at an evening of stomping, swinging, grooving, dancing and moving.

Danny Keen said: “It is going to be an exciting month at Anteros in October. It is a great privilege to be able to share my 40-year artistic journey and my love of music with the people of Norwich and Norfolk.”

Danny Keen studied art at Wimbledon School of Art and Ealing School of Art and graduated in fine art, specialising in painting from the Central School of Art in 1970. He then took a job as a trainee chef at The Players Theatre Club, working at night in order to pay his way through three years at Westminster Catering College.

Danny became a ‘chef de cuisine’, worked as a catering manager, then as chef patron of his own restaurants, jazz bars and hotels.  He retired from catering in 1998 to pursue a career as an artist specialising in portraiture.

Danny has always had an interest in martial arts, since joining a wrestling club as a youngster. He is a black belt in judo as well as a judo coach. He was the senior coach of Sheringham Judo Club for nearly 10 years. In more recent years he has turned his interest in the martial arts into a career in the Oriental healing disciplines of Shiatsu and Reiki. Danny is also a jazz and blues pianist.