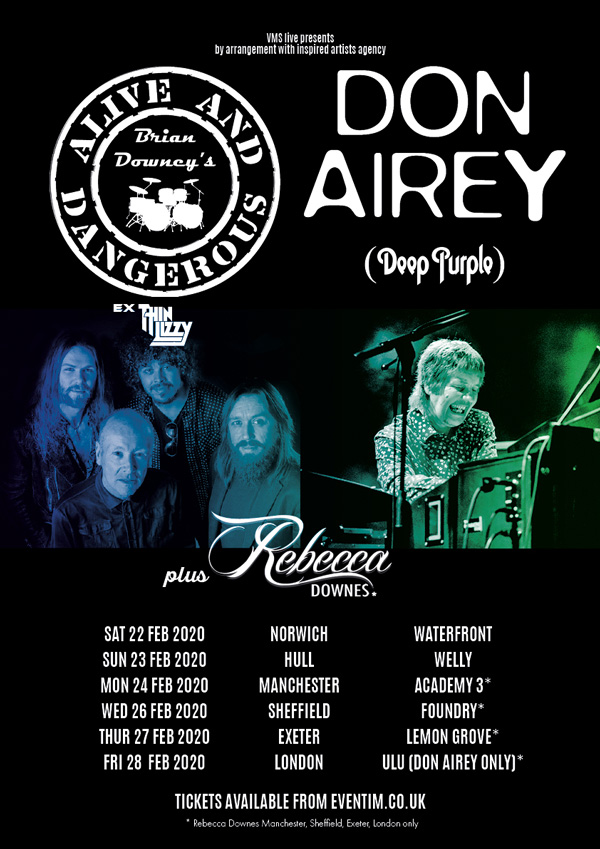 In these days where everybody seems to want to show off at every given occasion, Don Airey is without a doubt “One of A Kind”.

It is hard to find a name amongst all those that over the last 30 years have left their mark in the history of rock that has not utilised Don’s keyboard skills at some point. Amongst them Ozzy Osbourne, Rainbow, Whitesnake, Judas Priest, Gary Moore, Brian May, Jethro Tull, Black Sabbath and, obviously, Deep Purple, the band of which Don Airey has been a full time member for over fifteen years.

But – Don Airey has never been a session player. Bands and artists work with him for his unique musical vision, for the twist he gives to songs. It is with the same passion, the same energy, the same talent that Don Airey approaches his very own songwriting.

“One Of A Kind” is a true classic hard rock gem with melodies, great riffs and solos and a unique band unity. To top it all, his new solo album has been written and recorded using the spirit of a band featuring the following talented musicians:

Carl Sentance (from the current lineup of British legends Nazareth) is a singer that all fans of metal voices like those of Rob Halford and Graham Bonnet will love; Bassist Laurence Cottle, who has played with everyone from Black Sabbath, to Gary Moore, to Chick Corea, forges a great rhythm section with the thunderous talent of Jon Finnigan, apparently as loud on stage as he is at the after show parties. Last but definitely not least, there is the incredible talent of Simon McBride, who has no fear of being compared to the many incredible guitar players Don has worked with before.

“One Of A Kind” is one song after the other for the delight of every hard rock fan, who would be making a big mistake were they to overlook this album, out now.

It is not difficult to see Don Airey playing one day with Deep Purple in front of 15.000 people, and the next day playing the organ in the church of his beloved local village with the same concentration and respect for the music and the audience.

It is with the same spirit that Don shows no discernible effort moving from the glories of the last two Deep Purple albums (“NOW What?!” and “inFinite” both having benefitted from his ever present talent) to playing in clubs with his own band.

And always with a big smile on his face as soon as the guitar roars in, waiting to reply with his Hammond.

Hailing originally from Dublin, Brian enjoyed his first taste of success in Ireland with the top 20 hit ‘Morning Dew’ before forming ‘Orphanage with Phil Lynott.  The two went on to form the legendary Thin Lizzy with Eric Bell and Brian remained a constant member until the band split in 1983.  Having worked on Phil Lynott’s solo albums and the subsequent Grand Slam project. Brian relocated back to Dublin around the time of Phil’s  untimely death on January 4th 1986.

Brian remained in constant demand as both a touring and session drummer and regulary played live shows and recorded with renowned guitarist Gary Moore.  Brian is often cited as being an influence by many of the world’s top drummers and feels invigorated to be playing the songs he co-wrote in Thin Lizzy with his new band ALIVE AND DANGEROUS.

Tickets for the above shows are available via the following:

A #Norfolk #gppractice has seen appointment waiting times reduced by 90% thanks to a new online patient booking system. #fakenham #medical Practice says waiting times for appointments have reduced from four weeks to either the same day, or within 72 hours, because of the new system which enables patients to go online and request advice or an appointment without having to telephone. [ 553 more words ]
icenipost.com/norfolk-gp-practice-sees-patient-waiting-times-reduced-by-90-thanks-to-new-online-t... ... See MoreSee Less

A Norfolk GP practice has seen appointment waiting times reduced by 90% thanks to a new online patient booking system.
View on Facebook
·Share

Record turnout for 2020 booklet launch A record number of garden owners were welcomed by County Organiser Julia Stafford Allen to the official 2020 #norfolk National #garden Scheme booklet launch at the #thursford Collection on Saturday 8th February. The facilities were by kind permission of owners Mr and Mrs John Cushing. The event marked the official launch of the 2020 Open Gardens booklet, and presented an opportunity to thank garden owners, sponsors and volunteers for their hard work, dedication and support of the scheme. [ 578 more words ]
icenipost.com/record-turnout-for-2020-norfolk-national-garden-scheme-booklet-launch/ ... See MoreSee Less

Holt Festival today announced that this year’s Sir John Hurt Art Prize and Sworders Art Prize competitions are now open for entries. Established in 2012, the Holt Festival Sir John Hurt Art Prize is one of East of England’s top art prizes and attracts a wide range of entries from artists across the UK. In addition to a cash prize of £1,750, the winning work of art will be exhibited at the prestigious Sainsbury Centre for Visual Arts in Norwich, Norfolk. [ 654 more words ]
icenipost.com/holt-festival-invites-entries-for-the-sir-john-hurt-art-prize-and-sworders-art-priz... ... See MoreSee Less