Exhibition of sculpture, Thomas Houseago Where the Wild Things Are, Sainsbury Centre for Visual Arts 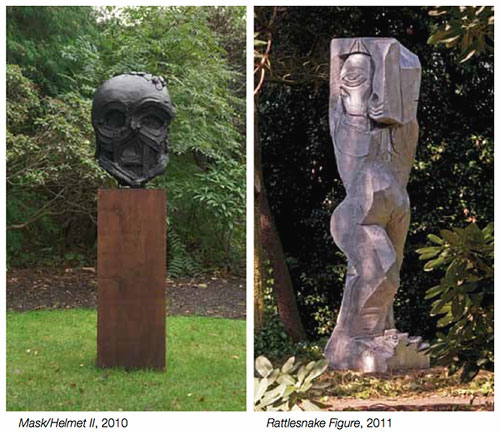 World Art Collections Exhibition
at the Sainsbury Centre for Visual Arts
Thomas Houseago: Where the Wild Things Are
at the Sainsbury Centre for Visual Arts
Exhibition runs until 27 January 2013
Where the Wild Things Are, an exhibition of sculpture by Thomas Houseago, opens at the Sainsbury Centre for Visual Arts at the University of East Anglia, Norwich, on Tuesday 31 July 2012 and runs until 27 January 2013. The remarkable energy and vitality of Houseago’s sculpture has established him as one of the most exciting artists working in the medium today, and this selection of bronzes and plaster works demonstrates the range of his practice, including a new work titled Head on a Two Tiered Base, on display for the first time.
Thomas Houseago is one of a growing number of artists to reclaim figurative art. He creates monumental work that is highly charged, raw and visceral, with a sense of the strange and unworldly. The sculptures assume sometimes primal forms and poses, appearing confrontational or even aggressive, but more often expressing fragility or awkwardness. Houseago’s work takes cues from the tradition of Modernism, but also references non-Western art, and popular culture including music, cartoons and science fiction, creating a sculptural language that is entirely his own.
While completely contemporary in feel, Houseago’s work demonstrates an interest in traditional materials and techniques. The sculptures retain an unfinished look, with remnants of the making process often visible, from indentations of the artist’s tools to exposed metal rods. Using modelling, carving and casting, his sculptures are made from a range of materials including plaster, clay, wood, rebar and hessian, sometimes cast in bronze or aluminium. The artist places great importance on the process of making and brings a profound intensity and energy to his sculptures. He has said that “as a sculptor I am trying to put thought and energy into inert materials and give it truth and form, and I believe there is nothing more profound than achieving that.” 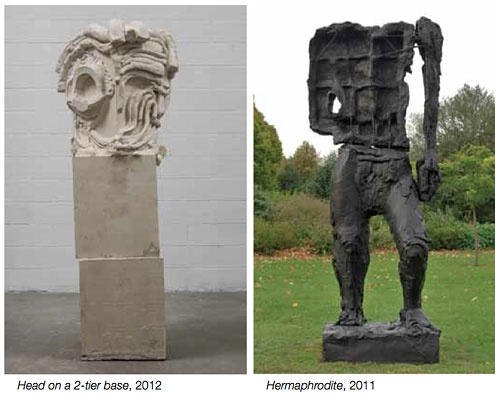 This exhibition is the second in the Sainsbury Centre’s Next Modern series, profiling contemporary art, and the first for some years at the Centre to be dedicated to sculpture. Since February, the Centre has displayed a single monumental bronze by Houseago, Hermaphrodite, in the Sculpture Garden alongside the Henry Moore bronze Draped Reclining Woman, and this was the catalyst for an exhibition of his recent work. In addition to works outside and inside the west end of the building, three sculptures will be displayed in the Living Area Gallery alongside the largely figurative Robert and Lisa Sainsbury Collection, emphasising the resonance between the two.
“We are very excited to be working with Thomas on this exhibition. He has discussed the influence on his work of modern sculptors such as Picasso, Epstein, Moore, Giacometti, Paolozzi and Brancusi, but he has also expressed his fascination with the art of Western Africa, for example, Fang sculptures from Gabon. The placing of his sculptures in and around the collection makes for fascinating juxtapositions in space and time, giving a new perspective on the work and on the collection itself.” – Calvin Winner, curator and Sainsbury Centre Head of Collections
Born in 1972 in Leeds, Thomas Houseago studied at Central Saint Martins College of Art and Design in London and De Ateliers in Amsterdam. He lived and worked for several years in Brussels before moving to Los Angeles. Houseago has come to prominence in recent years, initially in continental Europe and North America, and more recently in the UK since his first major exhibition, What Went Down, at Modern Art Oxford in 2010. In 2011, he was included in the Saatchi Gallery exhibition The Shape of Things to Come and more recently at Inverleith House, Edinburgh, in The Beat of the Show.