Visitors to the Sainsbury Centre on Saturday 14 July and Wednesday 18 July were able help artist Fernando Traverso progress towards his goal to paint 30,000 bicycles in memory of people who ‘disappeared’ in his home city in Argentina. Local people brought fabric with them, watched the artist paint the bicycles using an elaborate stencil (one every six minutes), and then took the paintings home with them. One of the works will shortly be on display at the Castle Mall in Norwich.

Artist Fernando Traverso travelled to Norwich from Argentina for the opening of the new Sainsbury Centre exhibition, AfterShock last week. He has been continuing his personal mission to paint 30,000 bicycles around the world as a continuing reminder of the people who ‘disappeared’ from his home city of Rosario, Argentina, during the military dictatorship (1976-1983) – he still has a long way to go with around 2,000 bicycles painted to date. 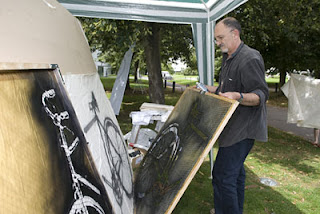 Fernando Traverso has a series of photographs in the AfterShock exhibition depicting some of the 350 bicycles he secretly spray-painted throughout the city of Rosario in Argentina. Traverso worked in the resistance during the military dictatorship (1976-1983) in Argentina until he was forced to go into exile. During that time 29 of his friends disappeared, and in total 350 citizens of Rosario were ‘disappeared’ during the ‘Dirty War’. An abandoned bicycle was often the first sign that someone had been kidnapped or ‘disappeared’ as they were the most common form of transport for members of the resistance. These bicycles became memorials for ‘the disappeared’ and metaphors of absence. 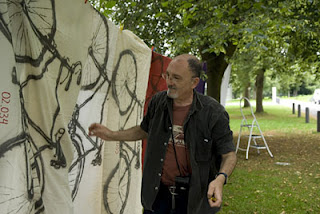 “At the present time, five years after that 24th of March 2001 when I painted the first one, on my way to work on my bike, I cross paths with other cyclists and at the same time with these others imprinted on the walls. I’m sure that some, on seeing them there, so alone and abandoned, continue on their journey forming a poem in their mind” – Fernando Traverso.

AfterShock, a major new exhibition of contemporary art which responds to the images and reality of conflict and violence that confront people every day in the media, opened at the Sainsbury Centre for Visual Arts on Saturday 14 July and runs until Sunday 2 September. The exhibition features the work of 16 artists from countries including Argentina, Columbia, Germany, India, Ireland and the UK.

AfterShock is the Sainsbury Centre’s contribution to Contemporary Art Norwich 2007, a celebration of international contemporary visuals arts across Norwich from 14 July to 31 August.