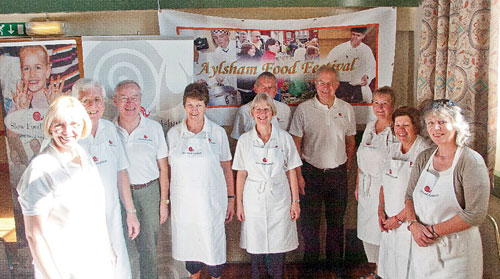 From the indulgent luxury of a croquembouche to the all-time favourite ‘full-English’ breakfast, this year’s Aylsham Food Festival had everything a true foodie could desire. A celebration of local food, its producers and associated businesses, the Festival – now in its sixth year – was another impressive success for its organisers, Slow Food Aylsham. 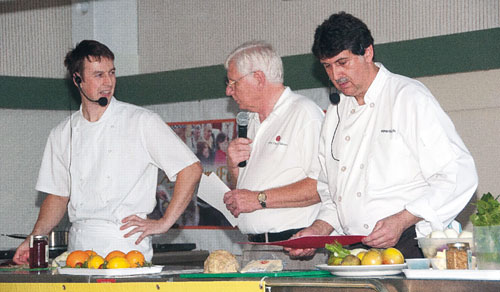 The croquembouches, a traditionally French pastry dish of cream-filled profiteroles bound together by caramel, was the highlight of the Festival Dinner, held at Aylsham High School. Year 11 students, under the watchful eye of their Hospitality & Catering teacher Jason Baxter, had sourced, prepared and cooked a selection of soups and desserts while their younger colleagues were on hand to serve the creations to 100 diners. 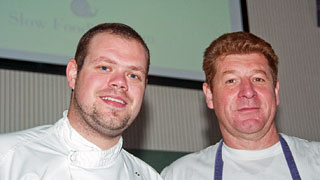 Between the two main courses, Catherine Temple of Wighton-based Mrs Temple’s Cheeses was on hand to conduct an entertaining cheese tasting of her own cheeses plus a selection from Ferndale Farmhouse Cheeses, all accompanied by locally-sourced cider. 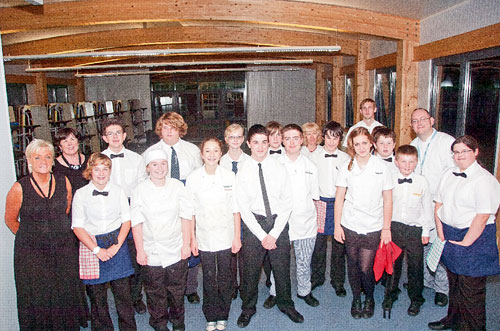 The Dinner was held on the Friday of the Festival weekend which started with the weekly Country Market in Aylsham Town Hall. The market theme continued the following day with the bi-monthly Farmers’ Market in the Market Place, where some 20 producers offered a varied selection of local produce. 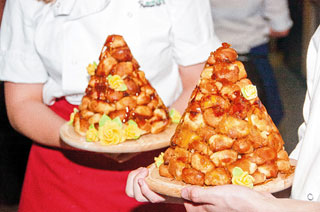 10 croquembouches were served to diners at the Festival Dinner

Running at the same time as the Farmers’ Market was a ‘Ready Steady Cook’ event held in the Town Hall and sponsored by J B Postle, which saw four local chefs competing in two sessions. First up were freelance chef Derrol Waller, pitting his skills against Mark Amies, seasonal chef at the National Trust’s Blickling Hall. Their contest was voted a draw by the assembled audience while a similar result was recorded for the second session when Mark Sayers, head chef at Coltishall’s Norfolk Mead hotel and restaurant met up against Gary Heffer, head chef at the Black Boys in Aylsham. 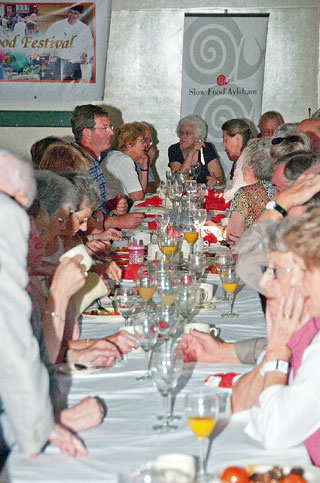 Aylsham Food Festival wouldn’t be complete without its Big Slow Breakfast so it was that on the final day, 120 guests sat down in the Town Hall to enjoy a ‘full English’, cooked and served by Slow Food Aylsham members and friends. With sausages, bacon and eggs from Aylsham’s three butchers, mushroom and tomatoes from the town’s Salad Days fruit & veg stall with bread, croissants and preserves all made by Slow Food members, the meal was guaranteed to be a success. 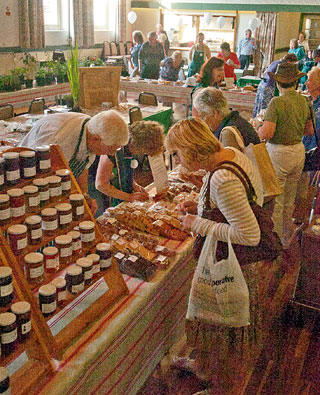 Summing up the weekend, Slow Food Aylsham’s vice chairman Roger Willis said, “Everybody in the Slow Food team has had a really enjoyable time during the whole weekend. It’s been great to see so many people enjoying the local food and to have been able to promote local produce. We are particularly grateful to our sponsors, Aylsham High School, Broadland District Council, J B Postle, the National Trust and Pierrot Photographic Services for their support.

“After a well-earned rest, we’ll be looking forward to the 2012 Festival and would like to invite anyone who shares our passion for local food to join us – for details take a look at our website, www.slowfoodaylsham.org.uk“