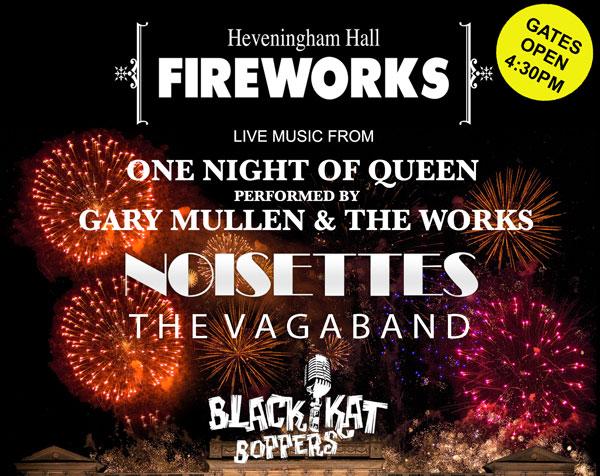 THE NOISETTES & GARY MULLEN & THE WORKS’ ONE NIGHT OF QUEEN

TO HEADLINE SUFFOLK’S MOST SPECTACULAR FIREWORKS SHOW AT HEVENINGHAM HALL

Indie-rock band The Noisettes will headline Suffolk’s most spectacular fireworks show at Heveningham Hall alongside Gary Mullen & The Works’ One Night of Queen, a leading tribute act to the legendary rock band, on Saturday 3rd November 2018.

The event, which is held in the 5,000 acre parkland of the Grade I listed Georgian mansion near Halesworth, will also see roots rock group The Vagaband and Southampton-based four-piece Black Cat Poppers take to the stage for a stellar line-up of live music & entertainment that goes on late into the evening.

The live music begins as soon as the gates open at 4.30 pm and the huge bonfire is lit at 4.45 pm whilst the spectacular fireworks display, once again by Full Effects Fireworks, takes place between 7 pm and 8 pm.

The LED Drummers, a magical live music, movement and lighting spectacular, will also perform during the evening.

“With a huge bonfire, spectacular fireworks plus lots of exciting live music & entertainment going on until late, this year’s show is set to make for a great Saturday night out,” said a spokesman for the organisers.

The event sees ALL proceeds raised going to local charities and the estate does not take any of its expenses, including the cost of the fireworks.

There is also a traditional funfair including dodgem cars and a large bar, plus fish & chips, hog roast, BBQ and a variety of other tasty local foods.

www.suffolk-fireworks.co.uk where you can also find more information about the event.

Vehicle Ticket (includes all passengers): £25 in advance / £30 on the gate

The Noisettes: Over seven incredible years, Shingai and Dan have delivered genre-bending pop with it’s own exotic twist and now they are back! Marking their return, ‘Contact’ is a record they are hoping will be a #Winner. The album is an eclectic mix — intoxicating melodies, emotionally evoking lyrics, and rhythms that are all sorts of funky.

Gary Mullen and The Works’ One Night of Queen: In  2000, Gary Mullen won ITV’s ‘Stars In Their Eyes’ Live Grand Final, with the largest number of votes ever received in the show’s history. The record of 864,838 votes was more than twice that of the runner-up. Gary began touring on his own and in 2002 formed a band ‘The  Works’, to pay tribute to rock legends Queen. Since May 2002, Gary Mullen and the Works have performed throughout the  UK, USA, Europe, South Africa and New Zealand to sell-out audiences. The outfit have also twice rocked the prestigious BBC Proms in the Park,  in front of a very enthusiastic crowd of 40,000. One Night of Queen is a spectacular live concert, recreating the look, sound, pomp and showmanship of arguably the greatest rock band of all time. This show will ROCK you!

The Vagaband: The Vagaband are a UK-based roots rock band. Equipped with an impressive and varied array of instrumentation (pedal-steel guitar, flugelhorn, mandolin, fiddle and clarinet all blend with unexpected ease) the band draw inspiration from both sides of the Atlantic to incorporate Americana, Celtic folk rock and vaudeville into a whole that gels into an unmistakable sound of their own. In 2013 they were listed in The Alternate Root’s poll of top 20 New Roots Bands of Europe. 2014 saw the release of their highly-praised second album ‘Medicine For The Soul’. In 2015, U.S. band Ween asked the band to remix material from their Chocolate & Cheese album, announcing the result as ‘genius’. Since then the band have signed a publishing deal with Wipe Out Music and have shared festival stages with the likes of The Handsome Family, Fairport Convention and Dodgy.

The Black Kat Boppers: Black Kat Boppers hail from down on the South Coast Water Way in Southampton and are 4 fellas who love to play hard boppin’, jump up, rockin’ blues, dance music. “With Black Kat Boppers you get to immerse yourselves in that rockin’ feelin’. Think of us as ‘rockin the blues’ if you must, cos that’s the way we roll!” – Roy Phillips. Influences include Rhythm & Blues, Jump & Jive, Ska, Doo Wop. Collectively, when all brought together, Black Kat Boppers sound is authentic, sincere & unique. 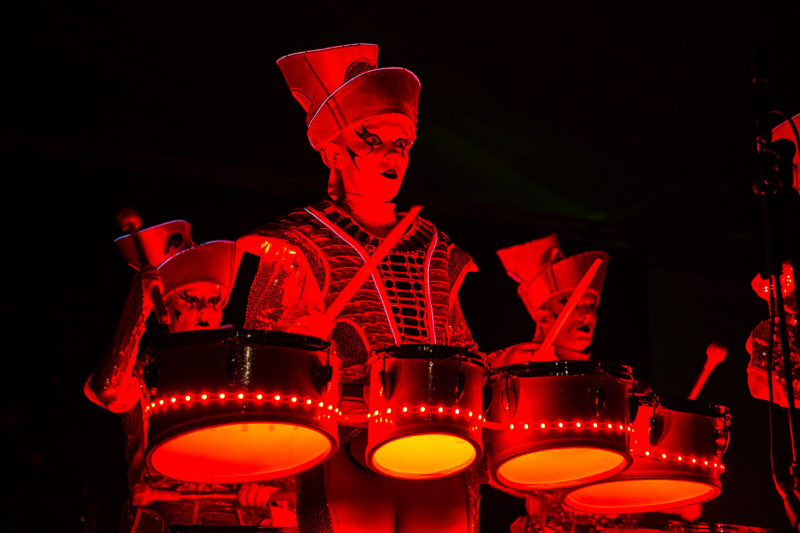 LED Drummers: A magical live music, movement and lighting spectacular in which seven mysterious characters composed of light and sound transform the landscape around them. The cast take the audience on a colourful dreamlike journey combining high impact drumming, dynamic choreography and beautiful lighting design. The performers constantly shift the focal point of the show, interacting with and surrounding the audience so they feel immersed in the theatre which unfolds. The performance gradually builds in intensity culminating in a dramatic climax of light, sound, smoke and movement.

Book online to save money & beat the queues

The Week Junior Science+Nature magazine will launch young minds on a journey of discovery every month. ... See MoreSee Less

There is so much nature in the city – read their blog post to find out what they've spotted! 👉 nwtru.st/NorwichNatureNotesMay ... See MoreSee Less

Now covering all belt categories at least 1 session per week! Get back into your Taekwon-do, no excuses, your instructors will be ready for the return back to the dojangs, will you? 🥋👊😁

This weeks schedule of classes and tutorials.Now covering all belt categories at least 1 session per week! Get back into your Taekwon-do, no excuses, your instructors will be ready for the return back to the dojangs, will you? 🥋👊😁

GTUK Distance Training Schedule from Monday 25th May 2020 - Something for everyone!

This weeks schedule of classes and tutorials.

* NOTE * these sessions are now being run simultaneously in a Zoom Meeting,
anyone wishing to take part will need the following: the links to meeting ID’s
and if required a password.

Stay Positive, Stay Safe, Stay at Home and do TaeKwon-do!

Please see this week’s tutorials and activities below

Join the group to watch live or later.

Syllabus PDF files are linked below*:

*Note: some tutorial pdfs are secured by GTUK student password, email [email protected] if you haven’t got it!

STAY IN! STAY SAFE and DO TAEKWON-DO! Come and learn #Taekwondo with us when this is all over! Beccles-Taekwondo.co.uk #Beccles #Martialart ... See MoreSee Less

Staying at home due to COVID-19? We are here to help & can deliver your NHS prescriptions for free. Sign-up to Well Online Pharmacy. ... See MoreSee Less

We are opening today from 12 - 4pm so if you would like a gentle browse amongst our plants in the nursery we will be pleased to see you. We have changed the layout to ensure social distancing is easy. #naturalsurroundings #glavenvalley #gardeningforwildlife #gardenponds #dragonfliesofinstagram ... See MoreSee Less

Join us for Arts & Craft!

Gather your paints and pencils for some mindful creativity alongside like minded people.

Feel free to grab a cuppa and just come along to see others, all levels welcome!

Good morning on day 67 of #PFTLightHopeJoy. Last night you would have seen the launch of our fun-filled illustrated book HOW TO BUILD YOUR OWN THEATRE! Now you can make your own PFT plays in your home or garden with everyday household items. Each day this week we'll show you little snippets from the book. Grab a few chairs, a washing line, a couple of brooms and a few sheets and off we go! Or download your book here: bit.ly/PFT_HTBYOT ... See MoreSee Less

The Lighter Side of the #Lockdown – #poetry #fanmask booklet raising money for #Norfolk & #Norwich #Hospital ICU
#Poems by Linda Marie Augood, Kathryn Bryant, Vee Pond and Carol Saunders
The Lighter Side of the Lockdown is a collection of poems written by four friends, all self-isolating in Norwich, during the Covid-19 #Coronavirus pandemic.
Published by Paul #Dickson #Books www.pauldicksonbooks.co.uk, 23 May 2020; price £5 plus £1.80 p+p. ... See MoreSee Less