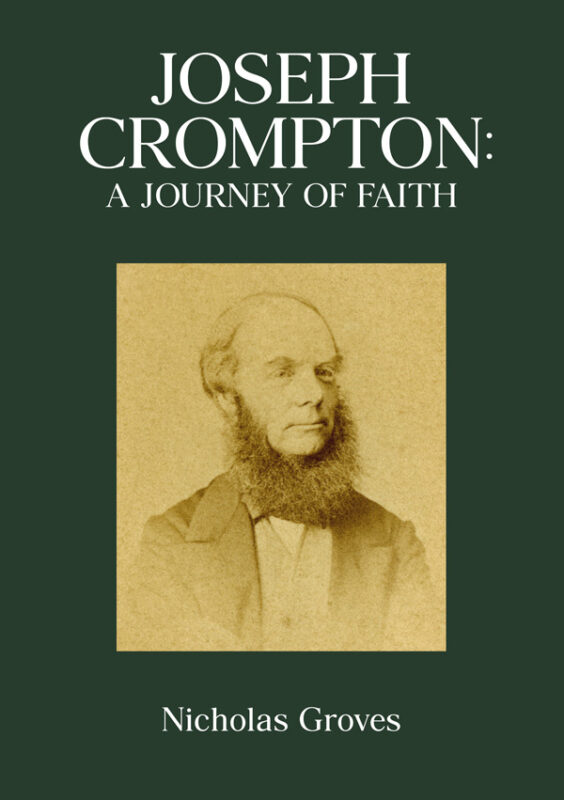 Church historian, Nicholas Groves has uncovered the remarkable ecclesiastical career of Victorian Norwich churchman, Joseph Crompton (1813-1878) in his new booklet, Joseph Crompton: A Journey of Faith. Published by Paul Dickson Books, price £5, www.pauldicksonbooks.co.uk, £1 from the sale of each booklet will go to The Octagon Chapel.

Crompton’s journey of faith began as a Unitarian minister at the Octagon Chapel, before he branched out and established an independent congregation called the Free Christians, which met at Blackfriars Hall, the former chancel of the Domincan Friary. He then joined the Church of England and ended his career as Rector of St Lawrence, in the wake of Edwin Hillyard’s Ritualist era, which had involved the notorious Father Ignatius and his ‘monks’.

“To the glory of God and in affectionate remembrance of the Rev Joseph Crompton, MA. Erected by public subscription as a mark of respect and esteem for his devotion to the poor and great interest in the welfare of the city.” Inscription below the Crompton memorial window at St Lawrence.

Nicholas Groves explains his interest in Joseph Crompton: “I first encountered Joseph Crompton when researching for my doctoral thesis, which was on the Ritualist churches of Norwich. The church of St Lawrence was an early (indeed, the second) convert to the Ritualist cause in Norwich, and Crompton became its Rector after a very turbulent period which involved the notorious ‘Father Ignatius’ (Joseph Leycester Lyne).”

“Looking into his background, I found that he had started out as minister of the Octagon Unitarian Chapel, and thought at the time that that was a remarkable change of views. It was not until forced idleness over the summer of 2020 gave me the opportunity that I was able to look further into his life. What I was not to know in 2008 was that I should mirror his journey in reverse, going from St George Tombland, another of the churches which had a Ritualist tradition, to the Octagon. In my case, organ-playing was the catalyst.”

“What the members of the Octagon thought of the goings-on at St Lawrence we can but guess; likewise we can only guess (though probably with some degree of accuracy) what St Lawrence’s thought of the Octagon. It takes a degree of fortitude for someone to change their religious views so much, but to do so in the same city, as a clergyman, even more so. That Joseph Crompton came out of this with goodwill on all sides says much about him.”

Nicholas Groves has been involved with various Norwich churches since 1981. He has taught at both school and university level, and is now a freelance writer and lecturer. He is a trustee of the Norwich Historic Churches Trust, and of the Octagon Unitarian Chapel, where he also plays the organ.

His previous publications include The Medieval Churches of the City of Norwich (Norwich HEART, 2010); Sarah Anna Glover: a memoir: (Curwen College of Music, 2006); An Exceptionally Busy Life: William Stephen Gilly, a memoir (edited and completed from a draft by Hugh Norwood; Lasse Press, 2014); St Julian’s Church (with Sheila Upjohn; Norwich, Friends of Julian of Norwich, 2018), as well as several booklets on the histories of various other Norwich churches; Charles AH Franklyn: a man of strong opinions (Burgon Society, forthcoming). He also edited the two volumes of papers from the 2014 and 2105 NHCT Conferences, Of churches, toothache, and sheep and Redundancy and Renewal (Lasse Press, 2016).