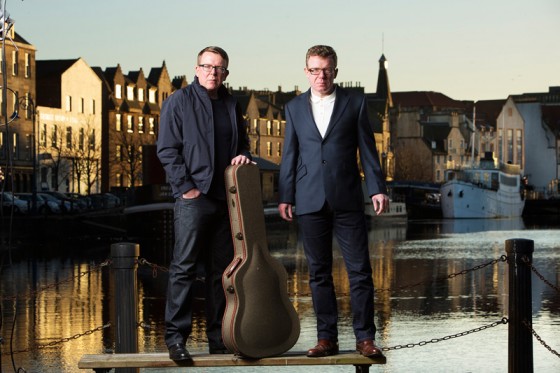 As part of their 2015 Seaside & Regional Summer shows, the Proclaimers announce concert at Lowestoft Marina Theatre on July 17

Strikingly individual, twin brothers Craig and Charlie Reid have over the years enjoyed huge successes across the globe and in April this year release their 10th album produced by Dave Eringa (Manic Steet Preachers, Wilko Johnson & Roger Daltrey) on the Cooking Vinyl label.

They have carved a niche for themselves where pop, folk, new wave and punk collide as the emotional honesty, political fire, wit and sing-along raucousness of their songs and their extensive touring has enlightened and entertained fans new and old.

In the process they have enjoyed Gold and Platinum singles and albums in UK, USA, Canada, Australia and New Zealand.

Following on from the theatre success of the musical drama featuring songs by The Proclaimers, ‘Sunshine On Leith’ the movie version was a hugely popular release in 2013, spending a month in the Top Ten generating over £4.8 million at the UK box office, the fifth highest grossing independent release of the year.

Expect to hear the classics Sunshine on Leith, I’m Gonna Be (500 Miles), Letter From America, I’m on My Way, Life With You, Lets Get Married and more.

‘My favourite band of all time. They write the most spectacular songs, big hearted, uncynical passionate songs.’ David Tennant

Tickets for the concert at the Marina Theatre go on sale on Thursday 2 April and are available by calling the box office on 01502 533200 seats can also be booked online at www.marinatheatre.co.uk