The Maids Head Hotel in Tombland, Norwich, is the new permanent home for The Norwich Panorama, created by John Moray-Smith in the mid 1940s for Morgans Brewery.

The Norwich Society acquired the Panorama in 2016 to both save and restore the panel. The magnificent 2.5 metre by 1.5 metre panel is now on display next to the entrance to the Maids Head’s Wine Press Restaurant.

The three-dimensional panel depicts the view of Norwich from St James Hill. It was commissioned by Morgans Brewery for the Cock Inn on King Street. Following the Inn’s closure in the mid 1970s, the panel was moved to Caistor Hall Hotel, where at some point after 2010 it was damaged and placed into storage. The Norwich Society bought the panel in 2016, and with the support of the Paul Bassham Charitable Trust, the John Jarrold Trust and the Norwich Heritage Fund, paid for its restoration. 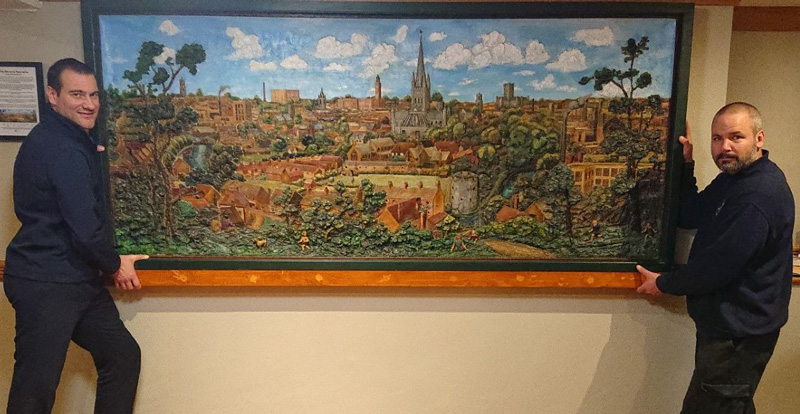 Paul Burall, Chair of Trustees, The Norwich Society said: “Having rescued John Moray Smith’s wonderful panorama of Norwich, from being abandoned in a garage, we are now delighted that the Maid’s Head is providing a home where the public can admire this 1940s view of the City. It is the only work by this eccentric artist portraying the City during his lifetime and therefore is an interesting contrast to his other works that are on public view that depict scenes from previous centuries.”

Christine Malcolm, General Manager, Maids Head Hotel said: “We are delighted to be providing a new home for John Moray-Smith’s magnificent Norwich Panorama. It will be a great talking point for our guests and visitors and is a wonderful enhancement to the approach to the Wine Press Restaurant.”

Tom Humphrey from the Fairhurst Gallery who restored the Panorama added: “The basic restoration work was very similar to that I use for any painting, although I minmised the use of liquids, as even solvents could damage the Plaster of Paris used by Moray-Smith to build up the work . I did not want to over-restore the picture so have left areas of thin paint to retain authenticity.”

“Moray-Smith’s work is very interesting,” continued Tom Humphrey. “He was clearly an experimenter and didn’t follow any set rules, making it up as he went along. The Panorma is a fascinating work of art and I think that the public will enjoy seeing it.” 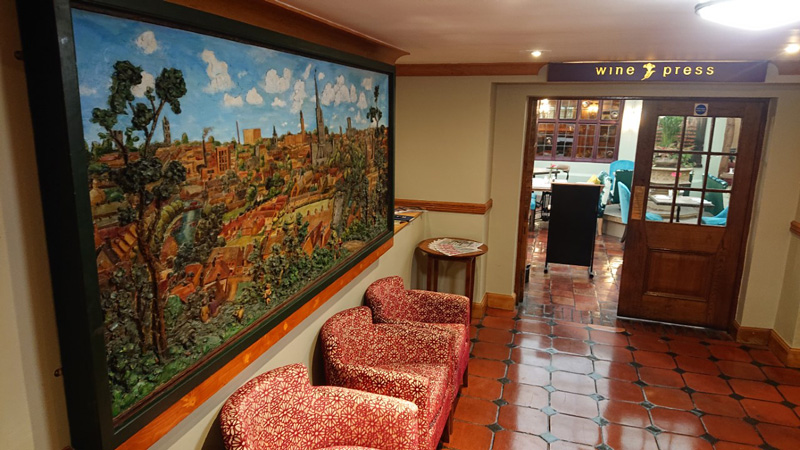 John Moray Smith worked in Norwich from the early 1930s until his death in 1958. Little is known about the artist before his arrival in Norwich, but his genius is still there for all to see in the unique, vivid, highly detailed and huge three dimensional panels (bas-reliefs), installed on the exteriors and interiors of pubs in Norwich and elsewhere in Norfolk. The panels were commissioned by Norwich based Morgans Brewery to distinguish some of its pubs with locally relevant strong visual images that depicted what life was like.

Panels that can still be viewed in Norwich include St Stephen’s Gate on the Coachmakers Arms, the Berstrete Gates for the pub of that name and The Prince of Denmark for the Prince of Denmark pub. Out in the county, the Maids Head’s sister hotel, The Ship at Brancaster features the model of a 19th century collier, The Black Diamond created by Moray-Smith.

For more information about The Norwich Society see www.thenorwichsociety.org.uk , t. 01603 765606