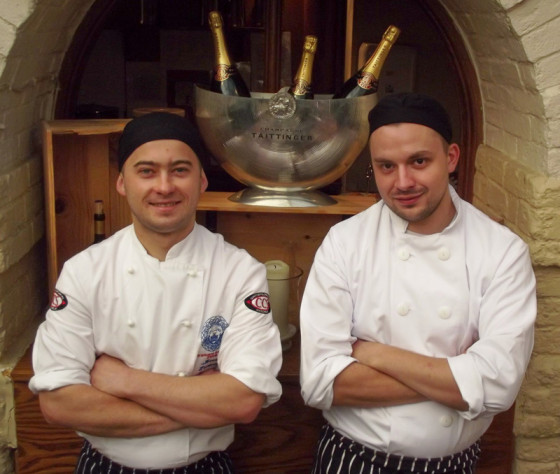 Marcin, who trained as a chef in Poland, has worked in Norwich since 2005. He arrived in the UK with minimal English, secured a job as a kitchen porter and has learned the language and the British way of running a kitchen on the job, to secure a Head Chef role in just eight years.  He was a finalist in the Craft Guild of Chefs Young Chef of the Year competition in 2008.

Marcin leads a young brigade of six. David Lovett (25), Sous Chef, is also new to the Maids Head. A self-confessed tearaway as a youngster, he left school with no qualifications, but was inspired to pursue professional cooking as a career when he began as a kitchen porter in Norwich aged 18.

Highlights from the new menu:

Marcin Pomierny said: “Working at the Maids Head gives me the opportunity to be creative. I test all new dishes with staff before they go on the menu. I am planning to develop some Maids Head signature dishes based on traditional English food and am very keen to secure a second AA Rosette for the restaurant. I am very happy to teach my team and help them progress, focussing both on the method of cooking and its presentation.”

David Lovett added: “I like to make dishes that people can’t make at home. It’s all about the texture and creativity. Marcin, who is know as ‘Magic’, is a very hard worker and creates a good atmosphere in the kitchen making it a strong team.”

Christine Malcolm, General Manager the Maids Head Hotel said: “We run a very busy multi-faceted catering business combining the restaurant, lounge and bars with special functions, conferences and weddings. Marcin and David have brought energy, creativity and passion to our kitchen and share our ambition to make the Maids Head one of the top food destinations in the region.”

For more information about the Maids Head Hotel see www.maidsheadhotel.co.uk,