The Marina Theatre has announced that two more top comedians have been added to its 2015 line up with tickets now on sale. Kevin Bridges will bring his new show A Whole Different Story to the Marina on July 9 and Rich hall will return on May 6 with his new show 3.10 To Humour. 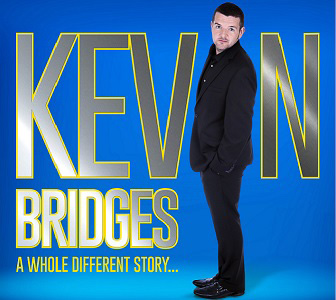 “Britain’s best stand up” The Sun

Kevin Bridges returns to the road with a brand new show A Whole Different Story… Scotland’s biggest export, Kevin Bridges, dubbed as “brilliant” by one of his comedy idols, Billy Connolly has had an astonishing rise to success.  His 2012 tour, Kevin Bridges – The Story Continues… smashed box office records selling a staggering 45,000 tickets on the first day.  Kevin went on to sell out an incredible nine-show run at the Glasgow SECC Arena.  His epic 136-date tour culminated in a sell-out run throughout Australia.  The DVD of the same name made it to number 5 in the charts for Christmas that year.

The last twelve months have been incredibly busy for Kevin with him hosting three shows for BBC1 including a referendum special of his critically acclaimed documentaries Kevin Bridges – What’s The Story and stand up shows on the Commonwealth Games and the Scottish Referendum.

October marks a momentous chapter in Kevin’s career with his hotly anticipated autobiography We Need To Talk About… being released through Penguin Books followed by a book-signing tour of the UK.  To finish an incredible year off Kevin will be performing his first solo show in Dubai this December.

Tickets for Kevin Bridges are priced at £25 each

Marina Theatre Lowestoft May 6 at 8pm

Rich Hall is the star of the critically acclaimed BBC 4 documentaries ‘Rich Hall’s Continental Drifters’, ‘Rich Hall’s The Dirty South’’ and ‘How The West Was Lost’.

Rich Hall’s critically acclaimed grouchy, deadpan style has established him as a master of absurdist irony and the king of rapid-fire wit. The award-winning Montana native renowned for his expertly crafted tirades and quick fire banter with audiences and delightful musical sequences saddles up and hitches his wagon to tour the British Isles once again. This is a comedian who’s plain spoken growling indignation and acerbic observations have an unerring talent for hitting his targets with precision every time, leaving his audience hanging on every word winning him fans all over the globe.  Perrier (Edinburgh Comedy Festival) Award and Barry (Melbourne International Comedy Festival) Award winner Hall has been described as a transatlantic messenger lampooning each country he visits with his common sense, and he is no less harsh to his homeland.

Tickets for Rich Hall cost £16 Each.

“Rich Hall is a comedy phenomenon” – The Sun

.‘Creeps up on you and ambushes your funny bone like no one else’ – The Scotsman