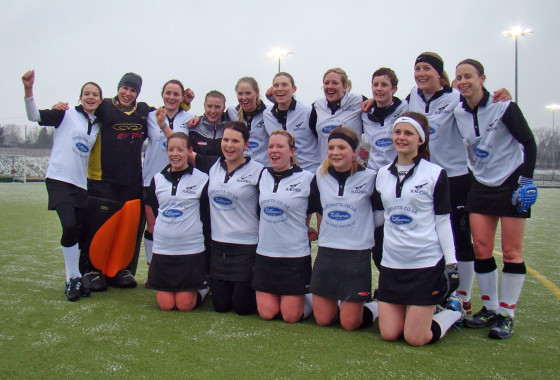 Magpies Ladies’ 1st team after their match vs Sevenoaks

We went into last Saturday with the possibility of three of our teams finishing as champions. The awful weather put on hold the hopes of the Ladies’ 2nds and the Men’s 1sts but could not thwart, despite a good attempt, the Ladies’ 1sts as they secured the Investec East Conference title after their home draw with runners-up Sevenoaks. This is a great triumph for skipper Charlie Harrison and her squad (twenty players in total across the season) and manager Nick McAllen, coach Clyde Camburn and assistant coach David Brook. Congratulations and the very best of luck in the play-offs for the two Premier League spots which begin on Sunday 7 April (Cannock HC) and conclude over the weekend of Saturday/Sunday 20/21 April (Reading HC.)

For the record this is the third time one of our ladies’ teams has won an outdoor national league title; the others being in 1999-00 (with promotion from Division 2 to Division 1) and in 2005-06 (with promotion from Division 1 to the Premier League). Nick has been the manager on all three occasions (what a record!) and Clyde was also the coach in 1999-00 with Debbie Leonard the coach in 2005-06.

It was to the credit of both sides that they wanted to play the game on Saturday – which Magpies went into three points and seven goals to the good – but after twenty minutes or so with the snow continuing to fall prospects for completion of the match did not look favourable but luckily conditions eased towards the break. Sevenoaks made much of the running in the first half and the Magpies’ defence, in which goalkeeper Megan Adams was in outstanding form, were at full stretch. To the relief of the crowd, many of whom were watching from the dugouts side with the wind behind them or else from the clubhouse, Angie Wheelhouse continued her splendid late season burst of goals by putting Magpies effectively nine goals ahead early in the second half before this was reduced back to seven with the deserved Sevenoaks equaliser fifteen minutes later. All members of the squad played their part on a horrible day for hockey including Katherine Ridley who was her usual assured self on her 1st team debut. This was the only match in the league to be played and as things stand Angie is the leading scorer with ten goals alongside Cath Gilliat-Smith who scored for Sevenoaks.

Earlier in the day the Ladies’ 2nds and Men’s 1sts were on their way to Bury St Edmunds and Wapping respectively before being advised that their matches had fallen victim to the weather. The Ladies’ 2nds, who are deservedly assured of promotion after Ipswich 2nds beat Bury last Wednesday, will now play their match at Culford School tomorrow (Wednesday) at 7.30pm and while victory would not assure them of the title it would be a huge step in the right direction while it looks as if the Men’s 1sts (who have to win to have any hope of the title) will have to wait until Saturday 13 April before playing Wapping in their final match of the season. By then either St Albans or Bedford (possibly thanks to their 22-1 win over Bishops Stortford – I’m still holding my fire over this aberration of a score line) will have secured the league title after being denied a chance on Saturday due to the weather. Whichever club wins the title will replace relegated City of Peterborough who may yet be joined by Cambridge City who have to negotiate the play-offs to retain their national league status.

The Ladies’ 5ths got the day at Weybread off to a promising start by beating Yarmouth 2nds 4-0 (Sophie Long 2, Issie Knowles, Clea Turvill) to continue their good run of form while the Girls’ Development drew 0-0 with their Yarmouth opponents. Next up were the Men’s 2nds against Letchworth with some of the players wondering whether it would be appropriate to wear woolly hats. I said ‘No’ as I sheltered in the team dug-out wearing mine! The team then proceeded to play as if it was Christmas and not Easter approaching as they missed chance after chance including penalty strokes by David Francis and Robbie Kinsella – the latter being given the chance to open his account for the season. At least his attempt required a modicum of resistance by the keeper! Nevertheless the team, playing some good hockey in the conditions and without leading scorer Martin Fields, won 7-3 with Philip Cobbald scoring the first two before David and Robbie atoned with two apiece with Richard Ling also getting in on the act. Goalkeeper James Lane, who has been in especially good form of late, had an impressive game while Richard Larkin gave another demonstration of the art and benefit of accurate passing.

Later in the day at Weybread the Men’s 3rds came from behind to record a good 2-1 win over Pelicans with goals by Gavin Cole and skipper Matt Brand before the Men’s 6ths recorded their best win of the season, watched by four hardy supporters, beating IES 4ths (and narrowly the now heavier snow) 8-3 with a remarkable five goals by Harry Haigh with the others coming from James Smith, Jack Newbery and Peter Dolton. In a busy day at Weybread our only teams to be beaten were the Boys’ Development and Ladies’ 4ths (who are away to Dereham 3rds tomorrow night at 7.30) leaving only the lateMen’s 4ths game a victim of the weather and unfortunately their re-arranged Sunday game suffered the same fate.

Away from home the Ladies’ 6ths were beating Lowestoft Railway 2nds 5-0 with goals by Laura Schultheiss 3, Elle Eglington and Tina Neill thereby securing second place in their league and promotion subject to the league structure next season. Congratulations to skipper Jodie Guest and her team. Meanwhile the Ladies’ 3rds were playing their third game since their double header of the previous weekend when drawing 3-3 (Kara Kilbourn, Catherine Kilbourn, Jemima Jacobs) against Lowestoft Railway having beaten Dereham 3rds 3-0 (Toni Glover, Georgie Minta, Georgia Pearson) last Tuesday and second placed UEA 2-1 (Toni Glover, Catherine Kilbourn) last Friday. They are in action again this evening (!) at home to Watton 2nds (7.30). This hectic schedule of catch-up games (they have suffered a total of eight postponements this season due to the weather) leaves them (before tonight’s game) in third place in their league behind Norwich City 2nds and UEA. At least Julie Podd and her team can have a rest this weekend as there are no club matches over the Easter weekend.

a) Emma Lee-Smith of the Ladies’ 1sts is competing in the Marathon Des Sables next month. Known as The Toughest Footrace on Earth it consists of six marathons in six days run in the scorching heat of the Moroccan Sahara Desert! Emma would very much appreciate your sponsorship support for two causes close to her heart, namely Help For Heroes and the National Kidney Federation. Please see the Home Page of the website for links to both charities.

c) The Men’s 7ths had their away game against Norwich City 5ths called off on Saturday and there was further frustration for the team when they lost 1-0 away to UEA 4ths last night despite creating a host of chances.

d) The Spring Prize Raffle made a very welcome profit of £1495. Thanks are due to everyone who sold and/or bought tickets.

e) The Senior Club Awards Night is being held in the clubhouse at 7.15pm on Friday 19 April. All club officials, other members, parents and supporters will be very welcome.

f) The club’s outside toilet is unfortunately out of use pending a replacement of the warped door.