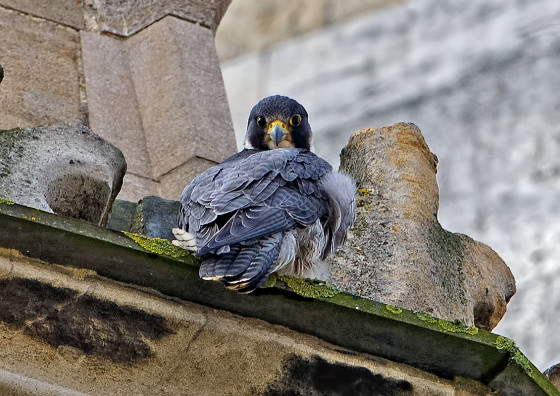 The peregrine falcons using the Norwich Cathedral nesting platform, installed by wild bird of prey conservation charity the Hawk and Owl Trust, have laid their fourth egg on 29March, Good Friday morning, around 6.35am. The third egg appeared at about 17.00 on afternoon of Tuesday 26th March. Their first egg of 2013 arrived at about 4.30pm on Thursday 21st March 2013, the 2nd about 04.55 on Sunday 24th March. Last year they laid four eggs and everybody is wondering if there are more to come this year.

Hawk and Owl Trust Conservation Officer Nigel Middleton says: ’People are concerned that the weather will affect the eggs.  Traditionally peregrines are sea cliff nesting birds and are used to harsh weather.  We have positioned the nesting platform so that the Spire deflects most of the North/North-easterly winds. Both parents are taking it in turns to incubate the eggs allowing regular breaks from the weather but ensuring the eggs are always kept warm.’

Video clip of the moment the fourth egg was revealed:

The fourth egg could be seen as the male peregrine brought the female a food parcel and she stood up from the eggs.  As she flew away to eat her meal the male settled down to incubate the eggs. 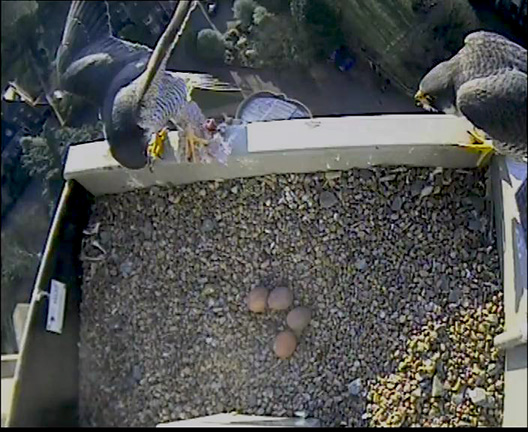 Normally a bird of the sea cliffs, wild peregrines have been slowly moving into our cities, especially over the last few decades, earning themselves the name tag of ‘urban peregrines’. In Norwich, a male peregrine first appeared at the Cathedral a few years ago and was then joined by a female. The Hawk and Owl Trust installed the nest platform, 75 metres above street level, in February 2011 to give them somewhere secure to nest. The birds started to use the new platform immediately and hopes were high for successful breeding in 2011, but the female was then driven away by a larger juvenile bird. Although the juvenile female was not expected to breed because she was too young, she surprised everyone by laying an egg but it did not hatch successfully. 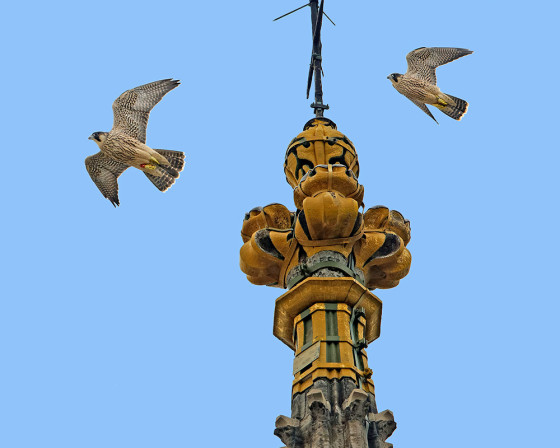 Happily the peregrines returned to the spire in 2012 successfully fledging two chicks, the first recorded in the city.

Over a million people watched the trials and tribulations of the daily life of the peregrine family last year via the live peregrine webcam or through the telescopes at the Peregrine Watch Point, set up in the Cathedral grounds by the Trust. These dedicated followers and many more are once again settling down to enjoy another season in the life of our own pair of ‘urban peregrines.’ The Watch Point started again on 25 March and will be open daily until the chicks fledge. The live webcam is available at www.hawkandowl.org; click on the Urban Peregrine button, or on the Norwich Cathedral website www.cathedral.org.uk where you can also find directions to the Cathedral.

The live webcam can also be viewed at the Hawk and Owl Trust’s reserve – Sculthorpe Moor Community Nature Reserve near Fakenham. You can sit in the warmth of the visitors centre and enjoy a cup of coffee and cake, whilst catching up on the latest episode of ‘The Peregrines’! The reserve is open every day except Mondays and the visitor centre is open from 9am until 4pm.  For more information please visit: www.hawkandowl.org/sculthorpe/about-sculthorpe/

If you are interested in volunteering to help at the Watch Point please contact the Hawk and Owl Trust by emailing the Peregrine Project Officer [email protected]. 20,000+ visitors came to the Watch Point last year, many of them children, keen to connect with the peregrines that have made their home in an urban environment.