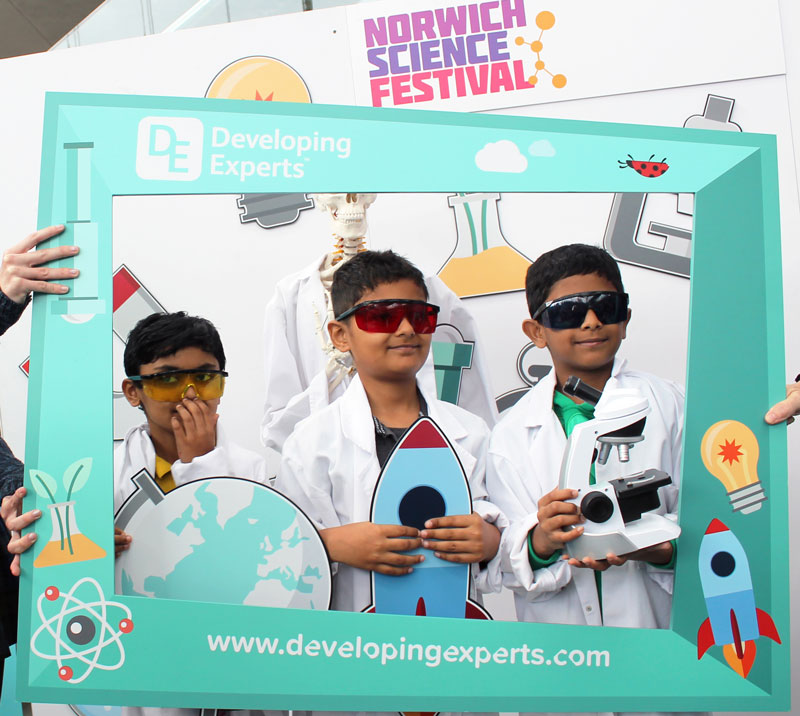 The Norwich Science Festival took place last week during October half-term, with over 135 events around the city enjoyed by inquisitive minds of all ages.

The Festival, now in its third year, is a partnership initiative involving many organisations from across the region, and is coordinated by The Forum, Norwich.

Each day of the Festival, The Forum hosted The Explorium – a family-friendly, hands-on science zone with free activities – which had over 87,500 visits during the nine-day public programme. The growing popularity of the Festival meant that there were 27 sold out events at venues around the city, including talks by Springwatch host Chris Packham, and anthropologist and broadcaster Alice Roberts, and shows by CBeebies star Maddie Moate, and astronomer and presenter Mark Thompson.

Around 50 volunteers gave up over 930 hours of their time, making sure the Festival ran smoothly, greeting the public and providing information.

Natalie Bailey, Festival Producer, said: “We are overwhelmed by the level of support for NorwichScience Festival, and by the sheer numbers of people who joined us to explore, discover and have funwith science. We’re hugely thankful to everyone involved in making this year’s Festival the biggest andbest yet – all our sponsors, partners, funders and countless contributors, scientists, speakers, volunteers, organisers and venues.”

New this year was Water Day, in association with headline sponsor Anglian Water, which looked at oceans, seas and rivers, and what we can all do to protect our marine environment.

Andy Brown, Head of Sustainability at Anglian Water, said: “It was another fantastic year for the Norwich Science Festival and it was great to see water getting such a high profile – so many people were interested and passionate about water, the science involved in getting it to them, and protecting the environment.”

This year, over 100 scientists from UEA and the other five partners that make up the Norwich Research Park took part in Norwich Science Festival, showcasing the cutting-edge research that takes place in our region.

UEA Vice-Chancellor Professor David Richardson said: “I’m very proud of UEA’s involvement in theNorwich Science Festival and I would like to thank the many students and staff who helped make it such a success. The Festival was engaging, thought-provoking, great fun and a brilliant way of showcasing the work scientists in Norwich are doing to build a better future for us all.”

As well as the public events, the Festival also included a dedicated Learning Programme of activities, workshops and shows for schools, home-educated learners and youth groups, enjoyed by at least 3,500 attendees; ran a Young Communications Team who reported for BBC Radio Norfolk and Concrete UEA, and worked with City College Norwich media students to produce a TV show dedicated to the Festival.

The Norwich Science Festival will return in October half-term 2019.