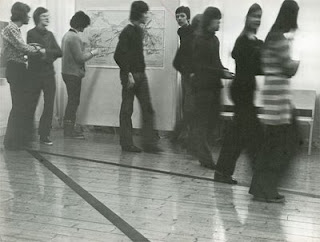 On Location
Art, Space and Place in the 1960s

at the Sainsbury Centre for Visual Arts

On Location: Art, Space and Place in the 1960s is a major new exhibition curated by Dr Simon Dell, Head of the School of World Art Studies and Museology at the University of East Anglia (UEA), Norwich. The exhibition opens at the Sainsbury Centre for Visual Arts, UEA, on Tuesday 23 September and runs until Sunday 14 December.

This seasons the events that accompany the autumn exhibitions at the Sainsbury Centre will celebrate the 1960s and radical ’68 spirit, including a special I Love 1968 event on Wednesday 5 November. Visitors to the Centre this autumn will also be encouraged to make comparisons between the ‘60s works in On Location and the new displays in the Constructed exhibition (see below).

On Location brings together for the first time, work by artists from the ’60s who challenged the relationship of the artwork to spaces in the gallery and the world outside. Rejecting traditional painting and sculpture, artists made work using a highly unusual range of materials to draw our attention to places beyond the artwork in the gallery. The exhibition includes works made using, for example, new technologies such as Telex and organic materials such as rocks, soil and even turf. Works by Robert Smithson, Alan Sonfist, Dennis Oppenheim, Vito Acconci, Jochen Gerz, Iain Baxter& and Boyle Family will be amongst those on display.

“I wanted to bring together work for a show which is just as much about what you can’t see as about what you can. Many of the artists featured wanted to ‘bring the outside’ in, connecting the viewer with another locality elsewhere in the world. Materials previously not considered by artists were used to make work including maps, Telex and photography as well as organic matter collected from specific sites”
– Dr Simon Dell.

From the mid 1960s artists in Europe, America and Japan began to rethink the exhibition space and how their work related to locations both inside and outside the gallery. Rather than simply abandoning the gallery, many artists resolved to create work that ‘brought the outside in’, confronting viewers with materials from specific sites. In turn, viewers were invited to reconsider their own locations and the world around them.

On Location brings together works from the late ‘60s and early ‘70s which demonstrate the different ways that artists challenged the gallery space. Robert Smithson’s Non-Sites use organic material, for example, rocks from New Jersey, to literally bring the ‘outside in’ and link the viewer in Norwich with the location in the United States. Boyle Family Holland Park Avenue Study presents the viewer with a highly specific location, this time in London, recreating sections of the pavement and road using mixed media, resin and fibreglass. On Location also includes documentation of Bill Vazan’s World Line, a series of exhibitions that linked galleries around the world. In each case lines were painted on the floor of the gallery and these are juxtaposed to photographs of pieces incorporating maps with the same lines marked, relating the gallery space with the ‘real’ location outside.

Jochen Gerz will be recreating his 1969 work, Alternatives to Memory. He will be installing a length of rope several hundred metres long, which will extend from within the Sainsbury Centre gallery onto the university campus, in the week prior to the exhibition opening. At both ends are a pair of gloves and a picture of what is at the other end. Again this work challenges the viewer to think about the inside and outside with a physical and conceptual link.

The 1960s is also a theme of the concurrent Sainsbury Centre exhibition, Constructed: 40 Years of the UEA Collection. This is the most extensive exhibition of the UEA Collection since the collection was founded in 1968. Constructed includes sculpture, painting, graphics and aspects of design such as architectural models and furniture. Works by Le Corbusier, Mary and Kenneth Martin, Charles Eames, David Bomberg and Marcel will also be amongst those on display.

This September the Constructed exhibition will be enhanced by the addition of a new selection of prints, paintings and textiles from the second half of the 20th century. Taking a lead from the On Location exhibition, the new displays will include work by American artist Sol Le Witt and pieces from the late ‘60s by artists with a connection to Norwich, Ian Chance and Simon Nicholson.