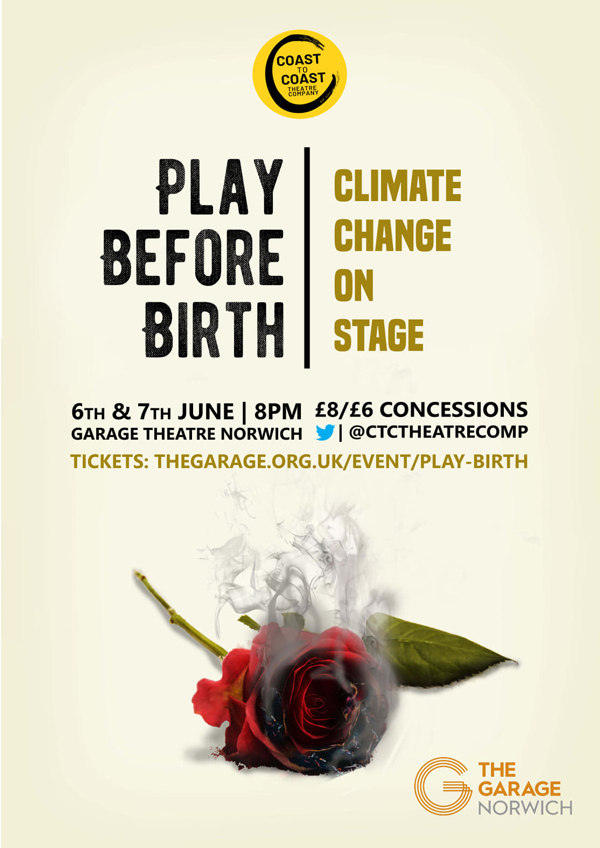 PLAY BEFORE BIRTH written and directed by Rohan Gotobed

The premiere of an important new play about young women and climate change, presented by Coast to Coast at Norwich’s Garage Theatre.

“I have a child who will burn to death on a dried up planet. If you want to be a parent then you should be arrested for cruelty to children. We need to be clear. Children have no place in the future.”

Klara is pregnant. She is 21 years old.

In October 2018, the IPCC released a report saying that the planet will reach the crucial threshold of 1.5 degrees Celsius above pre-industrial levels as early as 2030.

Klara will be 33, her son will be 12. At Klara’s baby shower, Moira presents an unthinkable solution:

Are children really the future?

According to a recent Business Insider poll, thirty-seven percent of respondents between the ages of 18 and 29 said climate change should factor into family planning. As groups like Extinction Rebellion and Conceivable Future raise awareness of our climate emergency, public figures such as US politician Alexandria Ocasio-Cortez have admitted “There’s a scientific consensus that the lives of children are going to be very difficult… it does lead, I think, young people to have a legitimate question, you know, ‘Is it okay to still have children?’”

Coast to Coast Theatre Company was formed in 2017 by Molly Farley and Rohan Gotobed, both students at the University of East Anglia. Coast to Coast believes in creating brave, innovative theatre. The stage is our chance to inspire people and we aim to empower emerging artists to help change regional conversations.

Rohan Gotobed is the joint artistic director of Coast to Coast. He previously wrote and directed our five star production About Lester. He has also written and directed for Minotaur Theatre Company and at the Maddermarket Theatre. In August 2019 he will begin studying on the prestigious MFA in theatre directing at Birkbeck, University of London. As an actor, he is best known for playing Young Sirius Black in Harry Potter and the Deathly Hallows.

He says, “this play is going to be intense, risk-taking and provocative. Play Before Birth is about young people living in a climate change world, something scary but incredibly important. I hope audiences who see the play have an affirming experience in the theatre but then struggle to sleep when they get home. As governments around the world declare climate emergencies in the wake of Extinction rebellion, now is the time to become aware of the facts and emotions to climate change. I can’t wait for audiences to become part of Klara’s decision and join our conversation about the modern world.”

We are delighted that Play Before Birth marks our first all-female production with a fantastic cast of Norwich-based actors. Evangelina Fortini, Caitlin Jacobsen, Ellie Martland and Rachel Nicholson have all appeared in acclaimed productions for Minotaur Theatre Company, which has previously been the starting point for stars like Matt Smith (Doctor Who, The Crown) and Olivia Vinall (The Woman in White).

Play Before Birth was developed with support from All-In Productions and the Garage Theatre as part of their February 2019 Scratch Night event.

In Person – 9.30am – 8pm, Monday to Saturday from Norwich Theatre Royal