Events in Norfolk and Suffolk / farming / Food and Drink February 23, 2009

A plentiful provision of pleasing puddings was on the menu for partygoers in Aylsham on Saturday 21 February. Slow Food Aylsham’s ‘Slow Pudding Party’ was an absolute sell-out with over 50 diners in the Town Hall enjoying an amazing selection of dessert puddings, preceded by a variety of soups.

All the dishes on offer were home made by Slow Food members and featured a choice of five different soups, ranging from the traditional ‘leek and potato’ through to the more exotic ‘red lentil and chard’, all served with home made bread. The main event of the evening was of course, the puddings and there were no less than 17 on offer. Served with either cream from Norton’s Dairy or home made custard, the choices included a Norfolk Treacle Tart, Lemon Meringue Pie, Chocolate Mousse, Pears in Moscato d’Asti and Apple Pie with a Norfolk Dapple cheese flavoured crust. Outstanding hit of the evening was a traditional Treacle Duff, made by Slow Food Aylsham member Ruth Harrison, which looked as it might have done in the 18th Century, gently steaming and only missing an ‘Eat Me’ label! 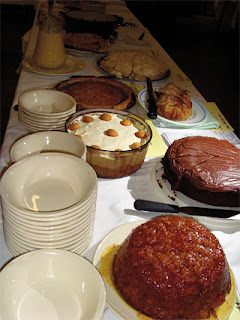 Very little was left at the end, only full tums preventing the last morsels being polished off. Liz Jones, Chair of the local Slow Food group summed it up: “Everyone I’ve spoken to has said how much they enjoyed the evening and how good the food was. Our members have excelled themselves and added to Aylsham’s reputation as a foodie town”.

Copies of recipes for the soups and puddings were available for guests to take home and try the dishes for themselves.

Adding a little ‘spice’ to the evening was the presence of two researchers from ITV’s Britain’s Best Dish programme. They were scouting for cooks who will enter the Norwich auditions for the 2009 competition and went away happy that they had got an enthusiastic response from a number of Slow Food Aylsham members. This national competition has a particular place in the hearts of Norfolk foodies as it was won in 2007 by Aylsham pig farmer, John Kenny who featured at the 2008 Aylsham Food Festival Cooking Theatre – run by Slow Food Aylsham – as a celebrity chef. Liz Jones commented, “It would be wonderful if our area could scoop the prize again. John Kenny has been a great ambassador for Norfolk food and I’m hoping that it will get more coverage in Britain’s Best Dish 2009.”

The next Slow Food Aylsham event will be a food-themed quiz night in the Town Hall on Saturday 25th April. More details are on the website, www.slowfoodaylsham.org.uk