Reviving a Norwich Tradition: Bringing Jack Back for Valentine’s Eve 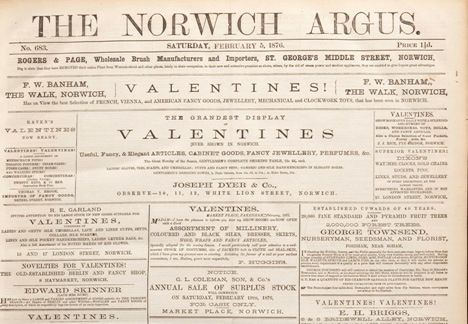 Valentine’s Advertisements in The Norwich Argus, 1876.

The Norwich Lanes are getting set to reignite an age-old Norfolk tradition of celebrating Valentine’s Eve. History tells us that the mythical figure of Jack Valentine would knock on doors across Norwich and Norfolk, leaving gifts for many but especially children on the evening of February 13th. But you had to be quick to pick them up otherwise they might just have vanished before your eyes.

Victorian visitors to Norwich were also puzzled to find the shop windows crammed with gifts in early February. Norwich had its own unique celebrations, its ‘one brilliant institution’ on 13th February, St. Valentine’s Eve. For weeks beforehand newspapers were full of advertisements for ‘Useful and Ornamental Articles Suitable for the Season’ available from local retailers. Shops took on extra staff and London Street in the Norwich Lanes bustled with people making secret purchases. Clocks, umbrellas and workboxes, vases, tea caddies and albums, shawls, jigsaw puzzles and writing desks were all bought as Valentine’s gifts. Just as at Christmas time, young and old were included in the festivities.

In 2014, the Norwich Lanes have decided to ‘Bring Jack Back’ with financial support from the Norwich Business Improvement District (BID). Expect to be wowed and inspired as local shopkeepers, restaurateurs and bar owners adorn their windows with Valentine’s décor and gifts in an attempt to win the newly established Jack Valentine Trophy. The Lanes will literally look and feel like the ‘Lanes of Love’.

A series of in-store events, late opening and special discounts throughout the Norwich Lanes on Valentine’s Eve will extend the celebrations further. Sit on the ‘love seat’ and record your Valentine’s memories with the help of the BBC at the Museum of Norwich at The Bridewell; open until late on 13th February you will be able to view some of the gorgeous items which might have been given as Valentine’s gifts in the past. There will also be story-telling about the enigmatic Jack Valentine from 4-8pm and other events throughout the day. Party in style at The Birdcage and celebrate ‘Jacks’ return with cocktails, DJs and secret love letter exchanges.

In addition, there will be a celebratory newspaper distributed across Norfolk which not only includes information about Valentine’s Eve but also a round-up of events. And to mark the occasion further, a special Jack Valentine ale has been brewed by the Great Yarmouth Brewer, Lacons and will be available in pubs and bars across the area.

‘By reviving this great Norwich tradition of celebrating Valentine’s Eve we are hoping to increase footfall and awareness of this already vibrant area of Norwich. With a great concentration of independent businesses, visitors and locals alike can expect creative and beautifully decorated windows which will add to the sense of occasion and bring an early spring feeling to the Lanes.

And of course there may even be sightings of the elusive Jack Valentine’ Jayne Raffles, Norwich Lanes Chairwoman.

Rachael Fretter, Marketing Manager for the Norwich BID says: ‘Norwich Business Improvement District (BID) is proud to be supporting Valentines Eve  in Norwich Lanes and we are excited by “Jack” running amok in the streets of Norwich – have you seen him yet?  Norwich is modern and vibrant, but it’s great to see the revival of Valentine’s Eve celebrations adding to the life of the city with exciting events, creatively decorated shop windows and a specially brewed Jack Valentine ale.  Norwich Lanes will be brimming with love and romance, so we look forward to Jack kicking off a whole host of exciting events taking place throughout the city in February.’

The event has already seen support from Stephen Fry who tweeted about the sighting of Jack Valentine to his 6.5 + million supporters.

A bit of history:

The earliest known Valentine was sent in Norfolk in 1477. It took the form of a letter from Margery Brews to John Paston, who is described as my right well beloved Valentine’. By Victorian times, improvements in postal services and printing methods meant Valentine’s Day was celebrated as never before. Shops in Norwich were filled with lavender-scented sachets and lace paper Valentines with matching envelopes. Postmen were even given a special allowance for refreshments to help them through the exertions of the two or three days leading up to February 14th.

‘We do not here content ourselves with lace-cut papers, but everybody sends everybody real presents anonymously; and, as on all gift-bestowing occasions, the children come in for the lion-share.’ – Valentine’s Eve in Norwich by Helen Downes, 1862

‘I am inclined to believe that this mode of keeping St. Valentine is confined to this city.’ – Notes and Queries, March 9th 1850 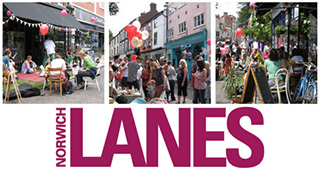