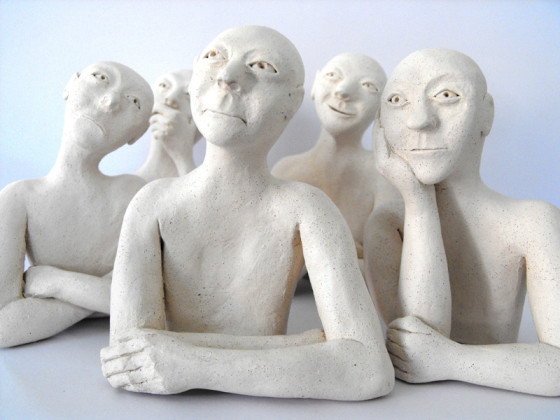 The Arts Centre Director, Arthur Lucas said: “Space and Form features an exciting mix of highly creative Norfolk sculptors presenting work that will entertain, challenge and inspire visitors to Wymondham Arts Centre. The works include abstract and figurative forms –– in glass, ceramics, found objects, and textiles. The scale ranges from the very large to domestic tabletop. “

“The light and height of Becket’s Chapel lends itself to sculpture: the shapes and spaces of the building itself becoming part of the exhibition, complementing but not dominating the modern works. Their shapes and forms provoke the imagination with an interplay of solidity and transparency, of bulk and empty space.”

Viv Allen from Brampton had a joint show with Karen Whiterod Step into our Worlds during Wymondham Arts Centre’s first season in 2009.  She creates sculptural ceramics as wall hangings and installations – both temporary and permanent: “My work evokes landscape and natural forms and the reflection of light on water and land. Finished pieces range from the small and framed to three-dimensional installations and composite pieces up to five metres tall.” www.vivallenceramics.co.uk

Judith Campbell is from Salthouse; her art is more likely to be found alone in a wild place than at a gathering, but for Wymondham she has ventured indoors. “Since graduating in fine art as a mature student in 1997, my love of nature and deep concern for the environment has become of paramount importance. Most of my work is sited in wilderness to honour the nature of the place.  These covert works of art, mostly of natural materials, are often never seen before they have been reclaimed by the seasons and the environment.”

“When it is discovered, the intense spiritual content often leads to appreciation by others.  A diptych made to express the sadness of a large area of heath land destroyed by fire was bought by the worshippers of Salthouse Church, renamed as ‘The Crown Of Thorns’ and placed in the altar space as a meditation on their faith.”

Lucy Edwards, who has a studio at Muspole Workshops in Norwich, will be exhibiting new figures for the first time, created for personal reasons. Lucy explains: “I’m a bit wary of the ‘art as therapy’ label but, for me, making has always been undeniably therapeutic and working now, in such a directly emotional way, is proving to be amazingly cathartic. The figures are personal but, as I prepare to exhibit them for the first time, I’m hopeful that they might go beyond being beneficial just to me and may also offer solace to anyone else dealing with life’s vicissitudes.” www.muspoleworkshops.co.uk 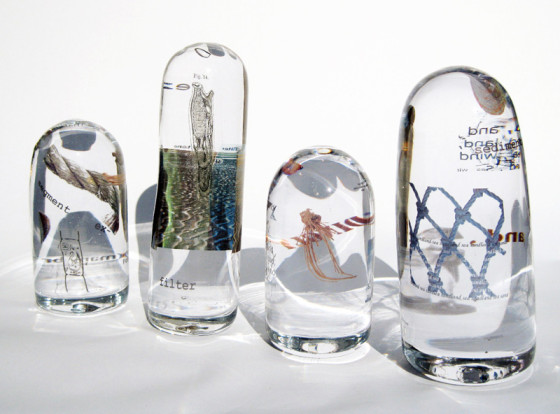 Max has worked with leading UK commercial glass studios and art institutions over the past 15 years including London Glassblowing Workshops, Flux Glass Design (which he ran for five years), London Glass Works and Sandfish Glass.

Nick Ball transforms objects to create pieces that challenge the imagination. He exhibited a 6x6x6-foot installation called ‘Black Cube’ at Wymondham Arts Centre in October 2010. Made from rows of suspended two-litre plastic drink bottles and originally designed for a sculpture exhibition in London for the visually impaired, the interplay between movement and sound was a great success with visitors. His major piece for this exhibition may not have as much movement, but is sure to intrigue. ‘Slidescraper’ is in homage to Ludwig Mies van der Rohe’s Seagram Building in New York. The piece explores the uniform façade of buildings integrated with stories of its occupants, played out by images of art, craft and architecture.

Beware wassap scamThe National Fraud Intelligence Bureau (NFIB) is warning the public about the continued increase in reports about scams where victims are targeted on WhatsApp by criminals pretending to be someone they know – typically their children.Between 3rd February 2022 and 21st June 2022, there have been a total of 1235 reports made to Action Fraud linked to this scam, with total reported losses exceeding £1.5mn.Criminals will usually begin the conversation with “Hello Mum” or “Hello Dad” and will say that they are texting from a new mobile number as their phone was lost or damaged. They will then ask for money to purchase a new one, or claim that they need money urgently to pay a billThe criminal will provide bank details for the payment to be made to, with some coming back with further demands for money.If you receive a message like this from a friend or family member, don’t send any money until you’ve had a chance to call them and confirm their identity. Taking a moment to stop and think before parting with your money or information could keep you safe.How to protect yourself:STOP. THINK. CALL. If a family member or friend makes an unusual request on WhatsApp, always call the person to confirm their identity.You can report spam messages or block a sender within WhatsApp. Press and hold on the message bubble, select ‘Report’ and then follow the instructions.Never share your account’s activation code (that’s the 6 digit code you receive via SMS). ... See MoreSee Less