Then and Now – Family Transport!

The government took steps in the last Budget to raise awareness of the air pollution caused by exhaust emissions. Almost every family in the country now has at least one motor vehicle.

Before the last war, for the majority of people living in small Towns and Villages the only personal means of transport was a bicycle. On the rare occasions they had to travel distances too far for the bike, they took a bus or the train.

Not many could afford to go anywhere very often. Those in regular employment might save for a trip to the nearest large Town or City to do their Christmas shopping or perhaps take the family down to the seaside for the day during their summer holiday.

If you had the money there were always excursions and cut price fares on both Buses and Trains, as well as private Coach trips. Unfortunately, at that time there were only a small number of families in a position to take advantage of these offers.

During the Summer school holidays the local Churches and the ‘Oddfellows’ along the Waveney Valley Line used to organise a train with two or three carriages to take the children to the seaside for the day.

This was something everyone concerned looked forward to. They always settled down close to Punch and Judy, and the same routine was followed every year. After making castles and playing games there was a picnic lunch on the beach with sandy cucumber sandwiches and lemonade. 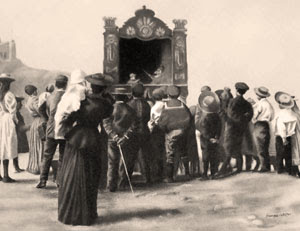 About four o’clock everyone was marched off to the Church Hall for a sit down tea. More sandwiches but with jelly, blancmange, ice cream and cakes to follow.

Of course there were lots of children not eligible to go on these outings. Only a small percentage attended Sunday school, and they were usually from the slightly better off families. Even if they had wanted to join, not many had the necessary ‘Sunday Best’ clothes to put on. For most of the young children from the poorer families it was another day off school and they just went off to play.

The L.N.E.R. frequently ran excursions along the Waveney Valley Line for adults. On Saturday afternoons they would leave for Great Yarmouth South Town Station at around four o’clock and return about midnight. The fare was nine pence, later it went up a penny to ten pence. This was affordable to many teenagers who would only need a bob or two in their pocket to enjoy a good night out with their friends. 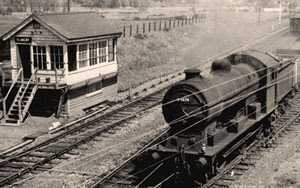 Unless they were at a Grammar School, boys and girls left school when they were fourteen or fifteen. Sometimes, those that didn’t leave took a job and worked for an hour after School and longer on Saturday mornings. Many shops employed these youngsters as Errand boys to deliver goods on their trade bicycles and to do the more menial tasks like cleaning the steps and sweeping the pavement.

Occasionally on Sunday there was a day excursion to Liverpool Street costing six shillings and sixpence. This was much too expensive for the majority of families.

In those days, the population in Rural areas had no worries about pollution.

Now, we have all been made fully aware of this danger. Yet, it seems there is no one able to publish facts conclusive enough to convince all of us of the consequences if we do not act immediately.

The whole issue would take on a new credibility if the World’s Leaders got together and made a positive gesture by stopping the destruction of the Rain Forests.

This is not only demolishing the many different forms of life they support, but is responsible for creating more and more problems for people all over our Planet.