Then and Now – School Leaving Age

It is always said children grow up much too quickly but that can’t be the reason for wanting to raise the School leaving age to eighteen. We can only wonder what those who are not going on to further education will learn in the last two years that will be of any help when they finally look for a job.

Through the ages there have been lots of opinions expressed about child labour. A long time has passed since boys of ten were thrust up chimneys to sweep them. Nevertheless, there are places where children as young as twelve are still exploited and have to work long hours. None of us want that but what we do want for our children is the most beneficial education, which meets the needs of every individual, to be available to all.

Before the last World War children remained at School until they were fifteen but were allowed to leave at fourteen if they had a job to go to. Those that hadn’t could work after School and on Saturdays. They must have been the original Part Time workers. There were many different Trades and Industries for them to choose from. Most of which didn’t require a high academic standard. All pupils took the 11+ exam and those that passed were funded by the State to attend a Grammar School where they could go on to take the School Certificate and qualify for a place at University. 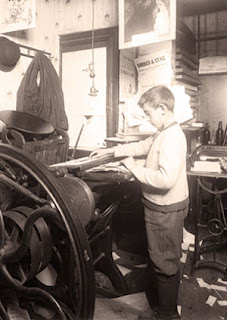 Parents of boys who failed the 11+ were all keen to get them an Apprenticeship which meant they were trained to do a particular job and automatically became members of a Trade Union. This was a legally binding contract between the boy, his parents and the employer for a period of four to seven years depending on what kind of Business it was. There was no guarantee of a job at the end of that time but generally boys choose to remain with the firm where they ‘did their time’. Especially when they were following in father’s footsteps. The Trade Unions were strong and kept a firm grip to ensure only their members did the skilled work. Other employees had to be very aware of exactly what they were allowed to do. 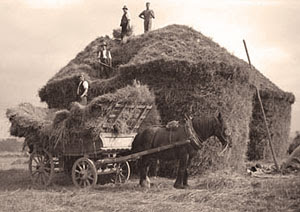 Those who missed out on an Apprenticeship had other options but they were mostly for manual work. They might have got a position with a Company as an Office Boy or Filing Clerk as a first step on the ladder. Girls who failed the 11+ looked for positions that suited their ability. Most of them only expected to support themselves until they married. Both genders often started their working lives as Shop Assistants while some girls, like their mothers before them, went into ‘Service’.

The Schools provided an adequate foundation of learning for the Universities and Employers to build on. After they were fifteen most teenagers were able to contribute to their keep and were no longer as dependant on their parents. By the time they were eighteen they were looked on as responsible adults. Old enough to be called to Arms.

There are good things to be said about some of the old system but we are probably well rid of a great deal of it. Children failing the 11+ might feel inferior and lose confidence but with the Class distinction which was rife at that time many would dread the thought of being one of about 5% attending a Grammar School. For them the School Certificate was the only door to a place at University and they had only one chance. To be exceptional at just one or two subjects was not enough. 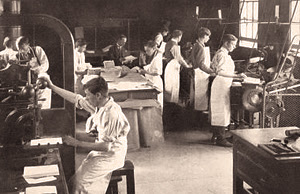 In many ways it was better for those who pursued a Trade but even if they were lucky enough to be ‘bound’ there was no guarantee they could do the job or like doing it. If an apprentice was not up to it, both he and the employer were stuck with each other until his time was completed. Then there would be an addition to the percentage of poor tradesmen who had to be given the less critical tasks which required little or no skill.

Today, at eighteen many of our youngsters are preparing to go to a University of their choice or perhaps take a year out and get a job to try to ease the financial pressure which they and their parents are put under as soon as they move to further education.

What is to be gained by keeping all youngsters at School until they are eighteen? It’s good for those who still have something to learn but for many it would be a waste of their time as well as resources. The only obvious thing to be gained from such a move is an immediate improvement in the unemployment figures!