Creatures Great & Small is at WLT gallery until 7 March 2014

The gallery is open 10am – 4pm, Monday to Friday

The gallery is on the ground floor of World Land Trust’s office
at Blyth House, Bridge Street, Halesworth IP19 8AB.

Creatures Great & Small, the current exhibition at World Land Trust gallery in Halesworth celebrates the diversity of the animal kingdom, with a focus on otters, which are now regularly seen in Thetford in Norfolk.

One part of the Creatures Great & Small exhibition focuses on British Otters, which are one of the greatest conservation successes of the late 20th century. On display are Maureen Minchin’s Lidded Pot with Otter and Martin Woodcock’s painting Otter at Thetford (pictured). Both artists are known for their connections to East Anglia. Also showing at the exhibition is James Desira’s amateur video of otters at Thetford. 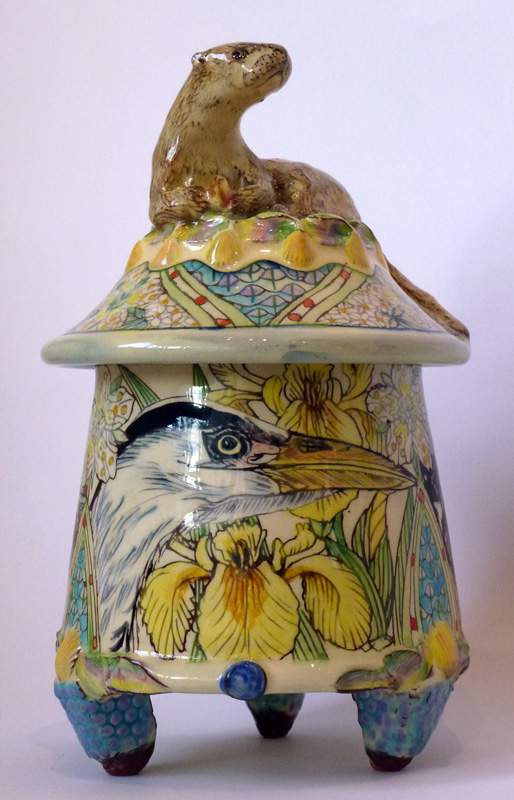 Since early 2013 otters have regularly been seen along the River Ouse at Thetford in Norfolk and, to the delight of naturalists, they are frequently seen on the banks of the river right in the middle of the town.

Wildlife artist Martin Woodcock created his painting following visits to Thetford in early 2013: “We went twice to see the otters. The first time, in reasonable weather, we drew a blank. This was in early-ish March 2013. A week later we tried again, when it was very cold, with frequent heavy showers of hail. I had several good views at varying distances, and I managed to get a few photos, though some people got very close indeed to them.” As many wildlife watchers will know, the best sightings often come with a degree of discomfort, and according to Martin: “The hail was quite painful at times!”

World Land Trust’s Digital Communications Manager, Dan Bradbury has also seen the Thetford otters. “They aren’t too hard to find, because if not immediately obvious, there’s usually a large group of photographers waiting at their favourite spots or where they were last seen,” explains Dan, adding: “The most noticeable thing about the otters is how uninterested they are in the army of followers that gather on the banks of the river running through the town.” The video shows just how uninhibited the Thetford otters are. 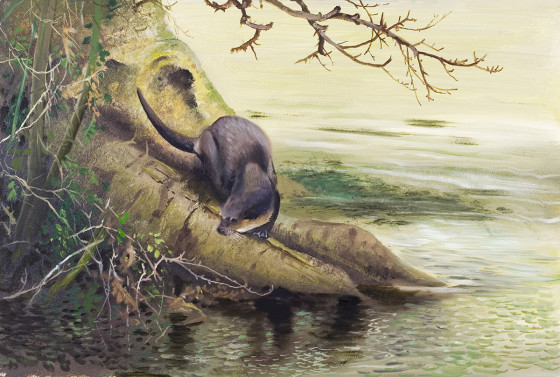 In many parts of Britain otter populations are now considered to have recovered to their natural level. This conservation comeback is all the more surprising considering that otters were nearly wiped out from lowland England in the mid 1970s due to pesticide poisoning, loss of habitat and hunting. With the approval of statutory conservation bodies, between 1984 and 1997 the Otter Trust released otters in Norfolk but there have been no reintroductions since then. Evidently, otter populations have recovered naturally, thanks to protection and the clean-up of English rivers in the past couple of decades.

Conserving wild habitats and species means humans sharing the planet with creatures great and small. Inevitably this can lead to conflict between people and wildlife, and otters are not immune from controversy. Conflict arises when otters feed on fish in garden ponds or hunt fish in Britain’s rivers. In the case of the Thetford otters, some people have called for a cull, while others have voiced their support of the otters. Last year, one of the Thetford otters was killed by an illegal fishing net, sparking fears of threats to their survival.

One commentator, Oliver Sudden, has wittily articulated the otters’ point of view. According to Oliver, the otters say: “The prevalence of anglers has reached such limits that a cull may be necessary. Mild mannered otters have said that a cull might be extreme and that it might be better if the fishermen just stayed at home with their wives” (quoted on the Thetford Otters Facebook page).

WLT hopes visitors to the exhibition will form their own opinion.