Wold Fight Back Against Classy Woodford

Woodford snatched victory at the death just as Wold had done at Norwich the previous week, in what had been a great game from start to finish, and a game which had thrilled the crowd right up to the final whistle.

It was a cruel ending for Wold who had battled back to take a six point lead ten minutes from time, but Woodford had the last word when their pack raided the Wold line well in to extra time knowing they needed a converted try to win and cleverly worked the ball nearer and nearer to the Wold posts before scoring that priceless try right under them to make the conversion as sure as possible.

Indeed it was those two extra points that turned defeat in to victory for the visitors but Wold can be proud of their performance as it again confirmed their right to be competing in London 2 North East against teams like Woodford who have been competing at that level for a good many years.

Wold found themselves five points down within the first ten minutes when a Wold line was not straight and Woodford won the ball at the scrum and piled on the pressure to score wide on the left.

Luke Wade brought the score back to 3 – 5 with an easy penalty in front of the posts but The silky Woodford backs gained the ball following a scrum and the outside centre broke the Wold line to put the winger in for a try on the corner this time on the left. The fine conversion was good and the visitors lead was now none points. Again though Wold kept Woodford in sight with another Luke Wade penalty.

Wold themselves had chances to score but the Woodford defence held tight but a little against the run of play the visitors scored again on the stroke of half time with another great team try just to the right of the posts and the score at the break with the kick good was 6 – 19.

From the restart Luke Wade’s drop out failed to go ten metres but as the Wold crowd groaned in disappointment Wold won a penalty from the resulting scrum and Luke Wade made good his previous error by slotting the ball between the posts from the halfway line.

Five minutes later Luke Wade slotted another penalty from nearly as far to bring the score line back to 12 -19 and Woodford seemed to be getting a little rattled.

Wold’s confidence was growing and it grew even more when Zak Loader went over in the corner for a try following a great drive by the Wold pack. Luke Wade’s conversion came back off the top of the post but nobody knew at that stage just how critical that near miss would turn out to be at the end of the game.

Wold only trailed now by two points and the tide had now turned in terms of game dominance towards the home team, much to the crowd’s delight, who could sense it and were now cheering Wold on in great voice.

It was deservedly that man Luke Wade who was to put Wold’s nose just in front for the first time with another towering penalty from wide on the right, as the crowd’s cheers became even louder at the thought of a possible victory against one of the leagues top sides against all the odds.

Those cheers turned to utter joy when after a spell of Wold pressure in the Woodford twenty two Josh Wallis used his pace from full back to go over for a great try wide on the left. This time Luke Wades kick brushed just to the wrong side of the upright but Wold had a six point lead. 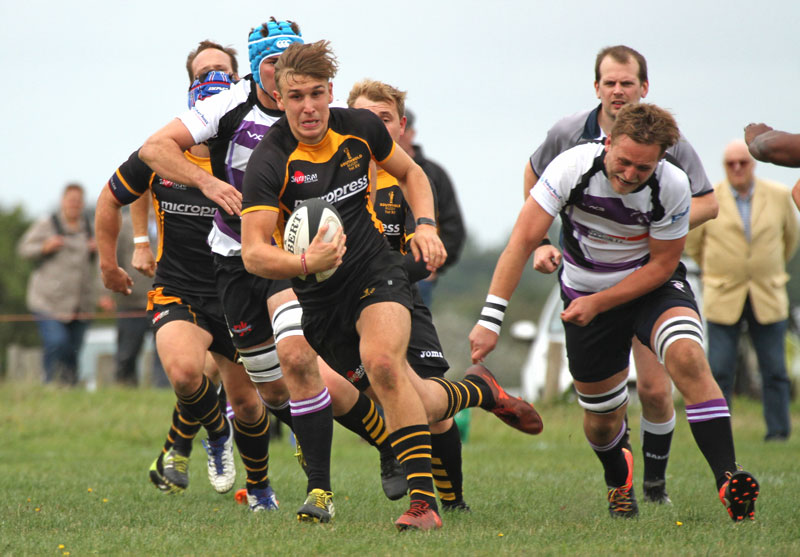 Ollie Carlstroem made a great break down the right touchline from inside his own half, which would have made the game safe for Wold but he was stopped two metres short and somehow Woodford gained the turnover to clear with a desperate touch kick.

It was a thrilling and tremendous last ten minutes until that final Woodford score, but despite the loss, Wold had dominated in the second half and actually had deserved more than the losing bonus point they had gained, and the travelling Woodford players and supporters alike knew that lady luck had certainly shone on them on the day.

Wold will have no fear of relegation if they continue to play to this exciting level and rattle the bigger Clubs that have been established in this league for years.

Praise must go to coaches Seb Anthony and Kev Cayley for Wold’s great start to the season not forgetting Wold’s great young home grown players who really are buzzing.

MOM : Luke Wade not only for his kicking but also his general play at Fly Half