Southwold Rugby Club wrote a new page in their history  yesterday in front of several hundred cheering Wold fans when they smashed Millwall to gain promotion to   London 2 North East. That deserved promotion now takes Wold to a higher level of rugby than they have ever played at before and it wasn’t just the fact they won, it was how they won.

The gracious Millwall captain, after the game, said that Wold simply played at another level and were too strong all over the pitch for the visitors, and it was a statement that no-one who witnessed this game would question.

Wold’s speed, fitness and total organisation together with their team spirit. ably lead by skipper and Man of the Match, James Hall, lead to the stunning display of attacking rugby in what was probably Wold’s best performance of the entire campaign.

In a word, Wold were untouchable and pretty much faultless for the entire eighty minutes.

Wold were seven points up after only two minutes when they drove up the pitch from the halfway line and Dom Hill got the opening try pretty much under the Millwall posts. Ten minutes later the visitors were awarded a penalty when the Wold back line crept offside 25 metres out but in front of the posts. The kick was good but was delayed for a few minutes as the unlucky Sam Webb had received an accidental injury to his eye and after an initial assessment it was decided he was to take no further part in the game and was substituted with the score 7 – 3 in Wold favour.

Millwall has a short spell of possession when their backs looked quite threatening but the initial penalty would be their only points as from the end of the first quarter Wold upped their game and simply overran the opposition.

Two Josh Wallis penalties moved the score on to 13 – 3 before Ollie Carlstroem got the first of his four tries wide on the left following a series of drives by Wold right across the pitch from the right and Wallis only just missed the conversion from the touchline.

Whoever scored first in the second half would probably determine the outcome of the game, either by Wold pulling too far ahead for Millwall to catch, or Millwall getting back in to contention.

Wold however pretty much sealed the game from the kick off when they kept possession for seven nor eight phases and swept up the pitch to the right and back to the left where Ollie Carlstroem ran in for his unstoppable second try. The try was a gamechanger and the team celebration following the great team try said it all as Wold began to sense victory as the score moved up to 23 – 3 with thirty five minutes still left on the clock.

Wold moved up gear after gear, and dominated more and more as the Millwall players battled but had no answers to the wave of Wold possession and attacks. Even when Millwall did get possession of the ball they were smitten by fierce tackling and were pushed backwards, and with Southwold winning nearly every lineout, both their own and the oppositions, and all of their own ball in the scrum, it was one way traffic right up to the final whistle.

James Hall went over for his try wide on the left on 60 minutes, after Will Debenham smashed through two tackles and sprinted up the touchline cutting in three metres out and taking the final tackle before beautifully offloading to Hall on the outside to score.

Wallis this time slotted form the touchline and Wold’s lead increased to 30 – 3.

Ten minutes later Adam Smith broke three Millwall tackles down the right hand side and the ball was fed back inside to Josh Wallis who broke the line before passing to Ollie Carlstroem who scored his third try punching the air in celebration under the posts and with Wallis adding the two easy points it was then 37 – 3 to the home side.

Jon Utting then crossed wide on the right for his try after Wold had pinned Millwall back in their twenty two. Utting had started a series of Wold drives when he broke away up the middle, and after repositioning himself back on the wing, the ball reached him a minute later for him to gleefully score but the conversion was missed by Wallis.

Just before the final whistle Millwall cleared their twenty two with a poorish kick up the centre and Wallis picked up and jinked his way down the right hand side before feeding Jon Utting who made good metres before he executed a grubber kick perfectly for Ollie Carlstroem to chase and Carlstroem duly won the footrace and dived on the ball for Wold’s final and his fourth try of the day. Josh Wallis crowned the move with a perfect two point kick from the touchline and as the final whistle then blew, the unflattering   49 – 3 scoreline meant promotion for Wold and the lengthy celebrations began.

It was a fantastic day for Southwold Rugby Club and great credit should go to Seb Anthony, Kevin Cayley and James Alvis as the coaches who have guided this young team and masterminded the promotion gaining performances.

Quick mentions too for the injured Pete Holmes, Jobe Brooks and Jacob English who all played their part in Wold’s season but missed out on yesterday’s game as did regular starters Des Brett through work commitments and Cemil Duruk who was away with family in Turkey, much to their dismay. 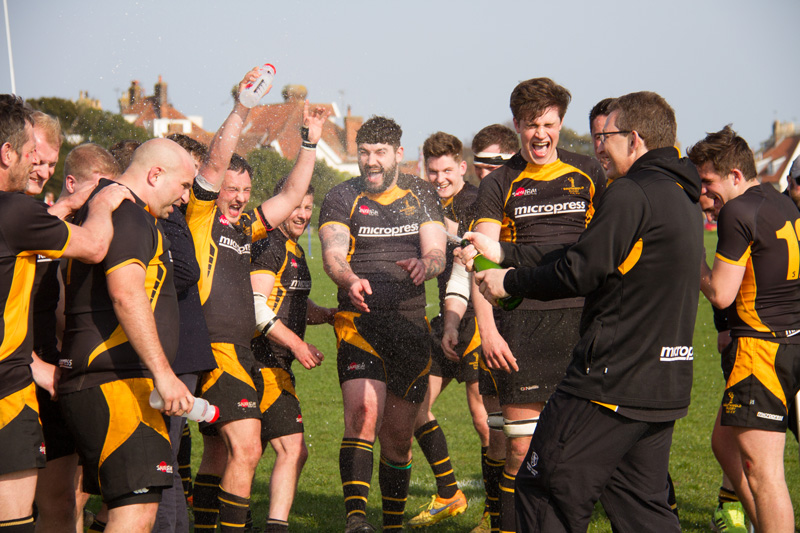