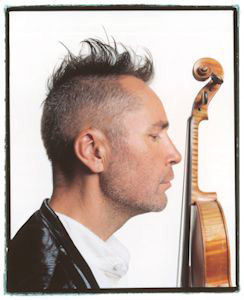 Lowestoft’s Marina Theatre has announced that World renowned Violinist Nigel Kennedy will appear in concert at the venue on November 12 2013, with a typically maverick programme celebrating the works of Bach & Fats Waller.

The event will begin with Bach sonatas and partitas for solo violin, after which Nigel is joined by an acoustic guitarist, a snare drum and a double bass to perform Kennedy’s own arrangements of the music of the legendary Fats Waller as well as classical cross over pieces.

Joining Nigel Kennedy on stage are international soloists Rolf Bussalb on Guitar, Yaron Stavi on Bass and Krzysztof Dziedzic on Drum. The unlikely combination of music by JS Bach, Fats Waller (and a few others thrown in for good measure) is set to showcase Nigel’s ability to play music of all styles in a hugely entertaining and enjoyable evening wherein skill and passion are set to come together for an electrifying evening of music.

Speaking of his forthcoming concert Mr Kennedy said, “Playing Bach and Fats Waller on one show is a dream for me – ­ two amazing keyboard players, both masters of harmony and melody.”

Marina Chief Executive Martin Halliday added, “We are delighted to confirm that Nigel Kennedy will appear at the Marina Theatre in November. Through our ongoing relationship with the Royal Philharmonic Orchestra, our audiences have already enjoyed many internationally renowned artistes and to host Mr Kennedy in this centenary year celebrating Lowestoft born composer Benjamin Britten, makes it even more special.”

For over twenty-five years, Nigel Kennedy has been acknowledged as one of the world’s leading violin virtuosos and is, without doubt, one of the most important violinists Britain has ever produced. His virtuoso technique, unique talent and mass appeal have brought fresh perspectives to both the classical and contemporary repertoire. He is the best selling classical violinist of all time.

Tickets for Nigel Kennedy’s concert at the Marina Theatre are now on sale – for more information or to book, please call 01502 533200.