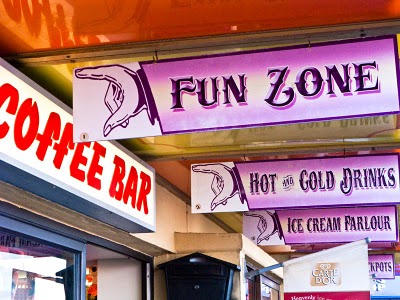 A display of two fascinating photographic projects by Norfolk-based photographers, Andy Crouch and Andi Sapey, opens in the Link at the Sainsbury Centre for Visual Arts, University of East Anglia (UEA), Norwich, on Friday 8 January 2010. The vibrant colour photographs of Norfolk and Japan, whilst taken in locations geographically far apart, sit remarkably well together. Admission to Your East and the permanent collections is free. The Sainsbury Centre’s new spring exhibitions, The Artist’s Studio and The Anderson Collection of Art Nouveau, open on Tuesday 9 February 2010 (see Notes).

The Your East display is the result of a collaboration between Andy Crouch and Andi Sapey who met by chance at the Sainsbury Centre.

“We were astounded that we had been exploring similar themes but in different countries; culture, colour, the quirkiness of a place’s past and future. Our photographs could have been taken by the same person or in same place, and yet they’re wildly different”

The photographs of Norfolk and Japan which comprise Your East are connected by the artists’ similarity in approach and style. Both are led by their passion for colour and allow their sense of humour to come through in their work. They also have a desire to capture alternative views of everyday life, often capturing scenes which may soon disappear.

The starting point for the projects was travel.

“While at University I had a part time job driving hire cars around East Anglia. We were told not to stop or go off route but we did and stopped at roadside cafés for a good English breakfast or two! It was while I was driving about that I had the idea of photographing some of these cafés, their signage and other aspects of this great British tradition. My project has expanded to encompass anything colourful and quirky in Norfolk that captures my attention. My photographs definitely do not give the more familiar version of Norfolk such as sweeping landscapes, windmills and rush cutters”

Life long fan of The Clash, Andi Sapey always knew there was more to life, and, like The Clash, left the confines of his cosy home town to explore the world.

“Travelling in Asia for two years I absorbed its culture and fearing there was too much here to lose to fading memory I picked up a camera. And so began one of my consuming passions, photography. I visited Tokyo in 2009, absorbed its fluorescent and dizzy culture, and followed its eccentric youth tribes which ram raid the 20th century for inspiration. My project led me to discover so many of the contrasts of Japan, extremes of wealth and poverty and technology and tradition, sitting side by side. I was also struck by the importance of respect in the Japanese culture which is nowadays streaked with a wicked sense of humour” 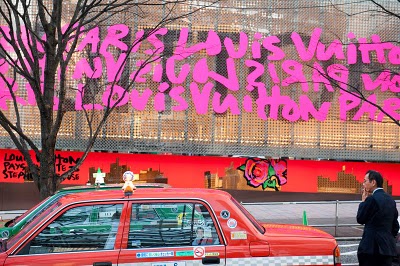 The display at the Sainsbury Centre will allow visitors to contrast and compare the images of Norfolk and Japan and develop their own sense of ‘Your East’. However, the two photographers are keen that people enjoy their work and are not too serious. Each photograph entertains and intrigues and tells its own story – all in vivid colour.

Admission to the Link display and permanent collections is free.

The spring exhibitions, The Artist’s Studio and The Anderson Collection of Art Nouveau, open on Tuesday 9 February 2010 and run until Sunday 23 May 2010. Combined admission £4, concessions £2.

Dates, Times and Information
Your East runs from Friday 8 January to Thursday 28 January 2010. The display will be open Tuesday to Sunday (closed Monday), 10am to 5pm and until 8pm on Wednesdays. Tel 01603 593199 www.scva.ac.uk

Admission to the Link display and the permanent collections is free.

The Anderson Collection of Art Nouveau and The Artist’s Studio run from Tuesday 9 February to Sunday 23 May 2009. The exhibition will be open Tuesday to Sunday (closed Monday), 10am to 5pm and until 8pm on Wednesdays. Tel 01603 593199 www.scva.ac.uk.

Combined Admission to The Anderson Collection of Art Nouveau and The Artist’s Studio
£4, concessions £2

These early gardens offer opportunities to get out into the countryside, enjoy woodland walks, and a time to appreciate narcissus and all the other spring flowers, as well as that essential cup of tea and piece of cake.Find out more here: icenipost.com/spring-into-a-garden-open-for-the-national-garden-scheme/#gardens #opengardens #NGS #norfolk #walks #gaytonhall ... See MoreSee Less
View on Facebook
· Share
Share on Facebook Share on Twitter Share on Linked In Share by Email
View Comments

ASD Consultants and Engineering offer services for a diverse range of clients from individual householders to large corporations, from their base in Halesworth, Suffolk.

Here at ASD we pride ourselves on being able to offer a friendly and personal service whilst maintaining the highest levels of technical expertise. All parts of the ASD group are free to act individually but our close partnering arrangement allows us to offer the efficiencies of an integrated service where required. ... See MoreSee Less

An apprenticeship is a great way to kick-start your career in local government.

Ellana joined East Suffolk Council as an apprentice in 2021 and is now working as an Assistant Design and Content Officer in our busy Communications Team.“I have grown so much throughout my apprenticeship, and it has allowed me to gain skills and confidence that I simply didn't have before I started. “As I have been able to learn from my team at East Suffolk Council and my training provider I am now equipped with a wide range of skills and experience that will help me progress in my career. “I am very fortune to have secured a permanent position with my team and I am excited to continue on my journey that started with an apprenticeship.”Find out more about apprenticeships at www.apprenticeships.gov.uk/apprentices/becoming-apprentice #NAW2023 ... See MoreSee Less
View on Facebook
· Share
Share on Facebook Share on Twitter Share on Linked In Share by Email
View Comments