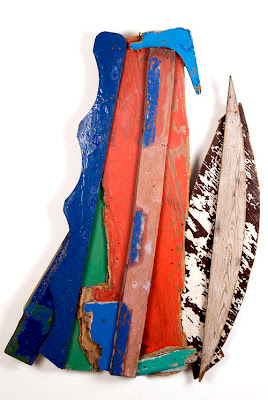 The exhibition, which includes excerpts from the film, opens at the Sainsbury Centre for Visual Arts, Norwich, on Tuesday 1 July and runs until Sunday 31 August.

The film, produced by Jules Hussey and directed by Sue Giovanni, will première at the Picture House Cinema (Cinema City), Norwich, on Tuesday 8 July as part of the events programme accompanying the exhibition.

The Film
Margaret Mellis: A Life in Colour is a 60 minute documentary film which tells the story of the Margaret Mellis’ life in her own words. The film brings together excerpts from Mellis’ diaries and writing, read by actress Susannah York, with interviews by Professor Mel Gooding (1993 and 1994) for the oral history project Artist’s Lives, which is run by the National Life Stories collection based at the British Library Sound Archive (see Notes to Editors for more information).

“The documentary, Margaret Mellis: A Life in Colour, weaves together the artists’ words with archive photographs and film, new stills, Super 8 and video footage, to produce an in-depth study of Margaret Mellis’ life and work. It is an oral history about a visual artist told using a moving image medium”
– Jules Hussey, Producer.

The Exhibition
A Life in Colour is the first major exhibition of work since Mellis stopped making in 2001, aged 87, due to ill health and features over 60 paintings and sculptures. The exhibition spans Margaret Mellis’ career, from the early still-lifes to the abstract reliefs of the 1960s and the magnificent constructions made from driftwood found on the beach near her Suffolk home. The construction Scarlet Undercurrent, Mellis’ final work, is included in the show. 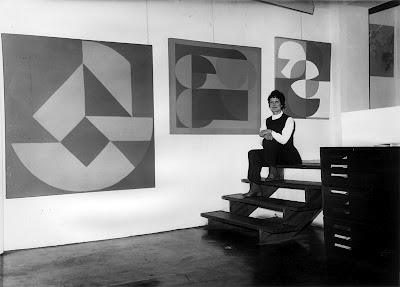 “For me, painting is way of making discoveries and of making a thing. When the areas of a painting start reacting together and yet hold together, the thing starts to live. Sometimes it gives a sort of kick”
– Margaret Mellis.

Margaret Mellis’ Life
Margaret Mellis was born in China in 1914 of Scottish parents, and moved to Britain as a baby. Fascinated by colour as a child, her remarkable career began at just 16 years of age when she started studying at Edinburgh College of Art (1930 – 34). As a young woman she was awarded a coveted travelling scholarship that allowed her to travel to Paris and across Europe. In 1937 she held a fellowship at Edinburgh College of Art before studying at Euston Road School.

In 1939 Margaret Mellis moved to St Ives, Cornwall, with her first husband, writer and painter Adrian Stokes. They both became central figures in the St Ives School of artists, which included Barbara Hepworth, Ben Nicholson and Naum Gabo. In St Ives, Ben Nicholson encouraged Mellis to experiment with collage and relief, prompting her to “think in a different way, not in colour, which was natural to me”. This was a formative period for Margaret Mellis, working alongside some of the most influential British artists in the 20th century.

In 1948 she married the artist Francis Davison and in 1950 they settled near Diss in Suffolk, moving to Southwold in 1976. It was after Davison’s death in 1984 that Margaret Mellis embarked on possibly her most creative phase, her ‘constructions’, made out of driftwood found on Southwold beach.