Following recent successes at Norwich Playhouse (Troy Boy and the ‘burlesque’ La Traviata) and Diss Corn Hall (Troy Boy, and last Autumn’s A Night at the Opera), the Merry Opera Company returns to East Anglia this March with a new production of The Magic Flute and a revival of its original staged Messiah..

THE MAGIC FLUTE starts its national tour at St George’s Theatre, Great Yarmouth on 15 March 2013 following a London run which attracted 4 star reviews form The Times. Timeout and the Evening Standard amongst others.  It will return to East Anglia to Norwich Playhouse on 22 June 2013.

It is directed by Norfolk resident Kit Hesketh-Harvey who has written a new libretto and created a new setting of The Magic Flute especially for the Merry Opera.  It will use his existing translations of the arias used in Scottish Opera’s recent production.

The new setting places Mozart himself at the centre of the action. He is desperately trying to finish the opera in spite of the illness which will eventually kill him.  As the fever takes hold, Mozart becomes Tamino, the shadowy forces of freemasonry escalate and … is it possible that Mozart is being poisoned? (http://www.merryopera.com/80/the-magic-flute)

HANDEL’S MESSIAH is a unique and unforgettable staged production of the piece at St Mary’s Parish Church Diss in collaboration with Diss Corn Hall on 30 March 2013.

Created by Lowestoft born and bred director John Ramster, this is the production’s third revival – twelve singers, who perform from memory, with organ accompaniment, have enthralled audiences since its first tour in 2011.  John went to Kirkley High School, then went on to Cambridge University and had his first taste stage work at the local theatre The Seagull.

The dramatisation is inspired by the universal story of birth, death and resurrection.  His production of Handel’s Messiah offers an intimate and personal insight to the meditations of 12 strangers as they question their faith. Each travels an emotional journey as despair, anger and doubt give way to hope, joy and a renewed belief in God and Humanity.  As the singers move around the church and interact with each other the audience is drawn into their individual stories.  (http://www.merryopera.com/82/messiah-tour-2013) 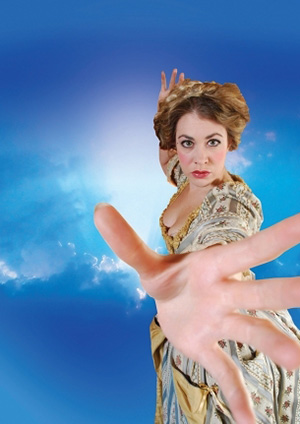 Part-pantomime, part-opera, Kit Hesketh-Harvey’s new production re-lives The Magic Flute’s sublime music and triumphant opening night in 1791. Lofty divas and low comedians flourish. Watching closely are the shadowy forces of Freemasonry. And the composer, Mozart, fears he is being poisoned. A delight for opera connoisseurs and new comers alike.

is well known for being one half of cabaret duos Kit & The Widow and Kit and McConnell and as a regular panellist on Radio 4’s Just A Minute, but he has been writing, adapting and translating musicals and opera since 1988 when he won the Vivian Ellis Award.  His translation of The Bartered Bride for the Royal Opera House was Grammy nominated and his other work includes The Magic Flute and Die Fledermaus for Scottish Opera, The Turk in Italyand La Belle Héléne for ENO and The Merry Widow for Opera North.  His productions of Troy Boy (La Belle Hélène) and La Traviata, which he has also directed for The Merry Opera Company have attracted 4 star reviews and excellent audience feedback.

This staged production with twelve singers, who perform from memory, with organ accompaniment, has enthralled audiences since its first tour in 2011. “powerful & affirming” Opera Now

Inspired by the universal story of birth, death and resurrection this production of Handel’s Messiah offers an intimate and personal insight to the meditations of 12 strangers as they question their faith. Each travels an emotional journey as despair, anger and doubt give way to hope, joy and a renewed belief in God and Humanity.

MESSIAH DIRECTOR JOHN RAMSTER:
began his career assisting directors such as Deborah Warner and Trevor Nunn at the Glyndebourne Festival. Since then he has established an international career directing in the UK, Ireland, Portugal, Spain and Serbia. He is a professor at the Royal Academy of Music and has also taught on the Jette Parker Young Artist Programme at the Royal Opera House. Future work includes Le nozze di Figaro for Turku Opera in Finland and completing a new novel about Handel.