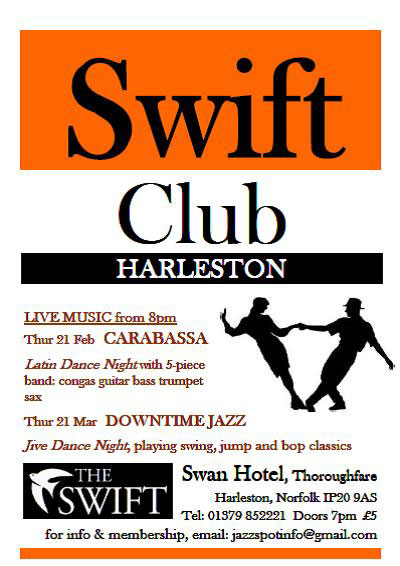 in the mood for dancing?

SWIFT CLUB AT THE SWAN HOTEL

HARLESTON HAS HAD A SECRET, well for a couple of years.  The renovated Swift Piano Bar at the Swan Hotel on the Thoroughfare high street in the south Norfolk town has been just waiting for a music night.  The dedicated piano bar next to the hotel has room for dancing, its own bar and, yes, a grand piano.  The new Swift Club launches this month as a place for anyone seeking the creative life along the Waveney Valley. 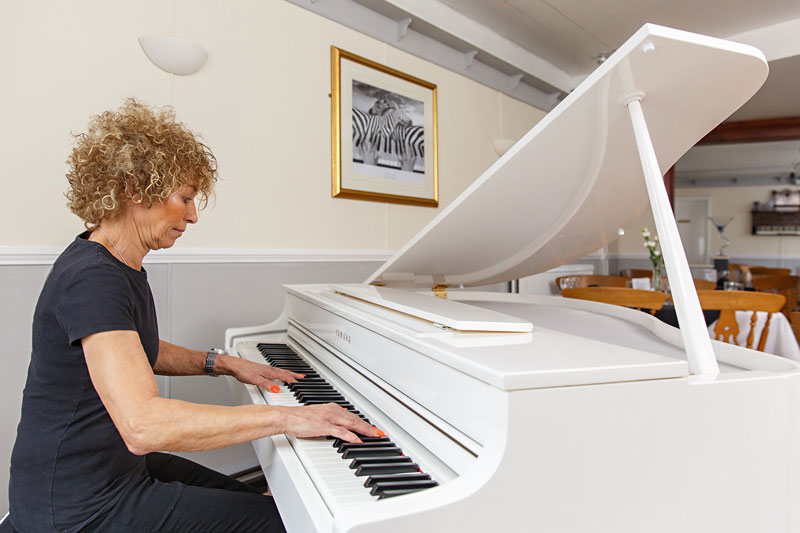 A place for dance classes to test their steps

A venue for local bands to play live

The Swift Club launch night on 21st February kicks off with a Latin Dance Night featuring Norfolk-Suffolk band CARABASSA, who bring sounds from Cuban Salsa to Brazilian Bossa.  Then on 21st March the club will follow up with a Jive Dance Night for those ‘40s-style swingers.  In 2019 the club will feature some fine jazz and blues singers and well-known local bands.   The Swift Club is also starting a Swift Sunday afternoon session on 3rd March for some relaxing about, food and in the months to come special Art Exhibitions by local groups and artists.

The revived Fox community pub in Garboldisham between Diss and Thetford now has a regular music evening on a Saturday that ties in well with the street-food vendors invited outside the pub.  Punters bring their food in to supplement their pint and can enjoy some live sounds.  On Saturday 16th March, the eve of St Patrick’s Day, there will be Irish tunes to sing along to from about 7pm.  Then on Saturday 20th April Waveney-based group Indigo will bring their world-music of sounds from Africa to Hungarian folk.  There’s lots more on at the Fox, so check their calendar of events: garboldishamfox.co.uk/calendar/

DISS STILL HAS A MUSIC SHOP

Peter has stayed on after Xmas and the shop on Mere Street in the old Currys is doing well, for your replacement strings, sheet music or something bigger.  Word is that the old premises has space in its back yard and the potential for more small units, so perhaps a little cluster of creative outlets down in that non-heritagy, triangly part of Diss?

CAUTION TO THE WIND

The local workshop ensemble Caution to the Wind is coming on and will have its first performance at an arts reception near Eye and Diss.  Mellis Arts group are having an exhibition in the back room at the Railway Tavern, Mellis from Friday 24th May to the Bank Holiday Monday.  Caution to the Wind will play an eclectic mix of tunes on the opening night.  To rehearse with the workshop once a month, contact [email protected].

Timeline PhotosWe're halfway through the Greater Norwich Local Plan Consultation. You have until 16 March to have your say about where homes and businesses will be built between now and 2038.

Find out about our roadshows & share your views at www.GNLP.org.uk

May seem a bit chewy 🥴Nestlé recalls Nestlé Ski Yogurt Variety Pack with Fruit Pieces because it may contain small pieces of black rubber due to an isolated incident in its fruit supplier manufacturing process www.food.gov.uk/news-alerts/alert/fsa-prin-10-2020-update-1 ... See MoreSee Less

We are looking for 20 people aged 16-65 (Year 12 plus) to perform alongside our professional actors. You will be recreating characters who were local to this area during the War, such as land army girls, coastal lookouts, munitions factory workers etc. You will be required to act, maybe sing. There will be some movement involved

The play has been specially commissioned to commemorate VE day and also the bravery of Joe Kennedy Junior, JFK’s older brother, who was destined to become the United States president until WW2 intervened. Joe was stationed in this area and was sadly killed in a huge explosion over Bythburgh on a secret air mission. For many years no one knew the significance of this flight – it changed world history. This is the first time the story has been told on the stage.

We are also taking the play out to local venues for a special INK Tour and the dates that you would be required for are likely to be:

These performances coincide with the VE Day commemorations.
If you are interested to take part, please contact Helen Hayes at [email protected] or telephone 07917 799456.
Thank you for your interest and we do hope you will support us by becoming part of this exciting project. ... See MoreSee Less