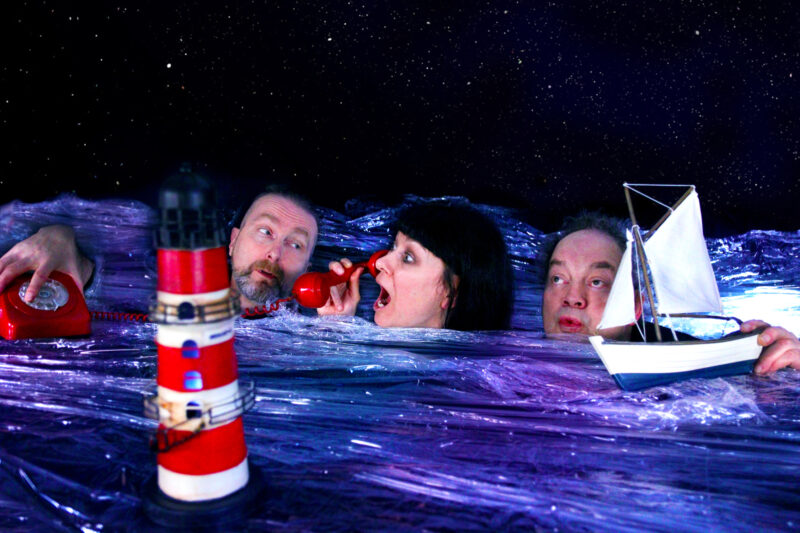 KlangHaus partners The Neutrinos and Sal Pittman are embarking on a new collaboration with lighting designer and creative Tom Clutterbuck to present the world premiere of their new sound and light experience LightHaus for next month’s Love Light Festival.

LightHaus will perform on each day of the festival, Feb 17, 18 and 19 February, at Norwich School’s Blake Studio, next to Norwich Cathedral’s main entrance. All performances are free but due to strictly limited capacities advance booking is strongly recommended. This 15-minute immersive experience for family audiences, music fans, the curious, and the unsuspecting incorporates natural sounds, light and projections.

LightHaus takes an intense journey through saturated colour, pitch darkness and blinding light blended with sound and song for any kind of weather. The sea’s constant force, ever changing hues and capacity to render all elemental are at the heart of the shows oblique narrative and, at its centre, a beacon of hope

Karen Reilly of The Neutrinos explained ‘LightHaus will be a drop in an ocean full of surprises, an offering to the sea and its power to shape our world. The sea’s constant force, ever changing hues and its capacity to render all elemental are at the heart of the shows oblique narrative and, at its centre, a beacon of hope.’

Audiences should expect evocative sounds from mournful fog horns to tidal bells, all reminders of the power of nature and our insignificance and vulnerability.

Art rock mavericks The Neutrinos have been at the cutting edge of music making for 20 years. Their KlangHaus show deconstructs the way a rock gig works. It became a smash hit at the Edinburgh Festival before going on to sell out over 100 performances at London’s Royal Festival Hall. The Times described them as ‘A blast of aural and visual magic’ in a 5 star review. In 2021 they took their revolutionary Darkroom installation, targeting climate change awareness to Glasgow’s COP26 UN Climate Conference, after trialling it at UEA’s Tyndall Centre for Climate Change Research.

Sal Pittman is an artist whose work lurks somewhere in the shadows; rich with tactile, off-kilter, unapologetic personality – working with light, supergraphics, typography and montage in a seamless line between analogue and digital.

The multi-talented and multifunctional Tom Clutterbuck has been described as “The Swiss Army Knife of Theatre” – the only thing you need take with you!

Love Light Norwich returns for a second year on 17, 18 and19 February 2022. It features stunning new installations, projections, and performances designed to amaze and delight. This free light festival makes Norwich shine with three days of enchanting experiences and is open to everybody. www.lovelightnorwich.co.uk

Another busy week is coming up for ICENI Taekwon-do... ... See MoreSee Less

🗺️ Tomorrow is national #GetOutsideDay - where are you heading out to across Norfolk? It seems like a great day to promote @pathmakersnorfolk's #WalkNorfolk2022 festival - an access-friendly walking festival running from 1st-31st October, with a walk for everybody of all abilities. The festival includes a series of events (some free and some ticketed) as well as a series of self-guided walks to try throughout the month. Places for the events are limited and some have already filled up - but there are still spaces left on many of the events. Have a look at their event page to see what's on:👉 Events page:pathmakers.org.uk/events/👉 Self-guided walks: pathmakers.org.uk/events/31-self-guided-walks-walk-norfolk-2022/#WalkNorfolk #GetOutside #WalkingFestival #Norfolk #NorfolkWalking #NorfolkCountryside #AccessTheOutdoors ... See MoreSee Less

Did you know that you can get together with other local residents and set up a NO COLD CALLING ZONE to prevent uninvited callers on your doorstep?According to our friends at Suffolk Trading Standards:‘No Cold Calling Zones (NCCZs) are specific geographical areas where residents have identified that they do not want visits from unsolicited or 'cold' callers.’‘NCCZs allow residents to collectively prevent traders and salespersons from calling at their homes without a prior appointment. They are created in partnership with residents, Trading Standards, local councillors, the police and other key local partners.’FIND OUT MORE 👉 suffolk.gov.uk/community-and-safety/suffolk-trading-standards/fair-trading/no-cold-calling-zones/ ... See MoreSee Less

Norfolk Open Studios 2022 begins tomorrow!If you haven't already planned your visits you still have time! Pick up a brochure or head to our website to find which artists, venues, and schools are opening their doors for the next 16 days.NOS22 runs from 24 September - 9 October#NOS22 #NorfolkArt #NorwichArt #NorfolkLife ... See MoreSee Less

Timeline photosWOW we've just had a count up and already have close to 400 festive Afternoon Teas booked in December. Our festive afternoon tea is fantastic value, and a really special treat. Served daily from Monday 14th November until Saturday 24 Decemberand includes; Selection of festive sandwiches, Homemade scones, Mince pie, Christmas themed cakes, Unlimited tea or coffee, a hot chocolate or soft drink. We have Gluten Free, Vegan and Vegetarian options available too! You can book yours with just a £5 deposit, check availability and book here > bookings.wroxhambarns.co.uk/book/festive-afternoon-tea/427 ... See MoreSee Less

Timeline photosIf you love your Batman, Iron Man, Dr Who or any other type of complete “Nerdity” then this is the place for you.Enjoy displays, exhibits, celebrities, talks and loads of traders from across the galaxy. Purchase everything from clothing and other merchandise to unique, bespoke cosplay accessories. Come along and soak up the geeky goodness that is NORCON.Saturday 24 - Sunday 25 SeptemberRead more: www.nor-con.co.uk/ ... See MoreSee Less

Our most recent exhibition is still running until Sunday 25th September where you can still view the art work in a variety of media created by nearly 50 Artists from all over Suffolk. We have a closing party on the Sunday to mark the end of this inspirational exhibition at the beautiful @ferini_art_gallery where you can meet the Artists. Refreshments will be provided. Everyone is welcome. #pakefield #lowestoft #gallery #galleryart #suffolkartist #suffolkexhibition #feriniartgallery #suffolkopenstudios ... See MoreSee Less

Not long now until the Aldeburgh Food and Drink festival opens up to showcase the best of Suffolk’s food and drink producers, On 24th & 25th of September at Snape Maltings, the festival will be promoting new and existing entrepreneurs and their products, as well as the county’s innovations in food production and farming. www.visitsuffolk.com/event/aldeburgh-food-and-drink-festival ... See MoreSee Less

Angel is out!wendybeasley.ukHere are a couple of pre release reviews. You won’t put it downBuy it now from www.victorinapress.com/product/angel/"ANGEL APPEALED TO ME AS SOON AS IREAD THE BLURB, AND I WASN'TDISAPPOINTED IT'S A WELL- PACED NOVELWHICH KEEPS YOU IN SUSPENSE UNTIL THEFINAL PAGES. IT'S CERTAINLY NOT AN EASYREAD AT TIMES - THE THEMES EXPLOREDINCLUDE ABUSIVE RELATIONSHIPS, KIDNAPAND MENTAL HEALTH ISSUES, AND THENOVEL IS HARD- HITTING IN EVERY SENSE.BUT THERE IS ALSO A GREAT DEAL OF HOPEAND LOVE AT THE HEART OF THIS STORY ANDTHE ENDING IS PERFECT"FLO KNOX"ANGEL IS A REAL PAGE-TURNER, AND AS WEFOLLOW LYDIA'S STORY. WE DISCOVER THINGSGET BETTER AND WORSE FOR HER IN TURN.KEEPING THE READER GUESSING UNTIL THEEND. BUT ANGEL IS FAR FROM BEING ALLDOOM AND GLOOM = THERE IS A POSITIVESTORY HERE TOO. AND LYDIA FINDS HOPE ANDHAPPINESS ON HER TOURNEY. A REALLYSATISFYING, IF SOMETIMES UNSETTLING,READ"BILLIE STEWART#Authors #books #angel #localauthor #norfolk ... See MoreSee Less

Timeline photos⭐FREE Wellbeing Champion TrainingWellbeing Champions care about where they live and work and understand the importance of talking about mental health and wellbeing. This training is for anyone, but especially useful for organisations such as schools, businesses, charitable or community organisations. If you would like to improve your understanding of mental health and create a supportive working environment or community, becoming a Wellbeing Champion may be for you. Please contact [email protected] Or book your place directly via the Eventbrite link: www.eventbrite.co.uk/e/wellbeing-champion-training-online-registration-400638559717?aff=ebdsoporg... #ChampionTraining #Wellbeing #MentalHealth #Free ... See MoreSee Less