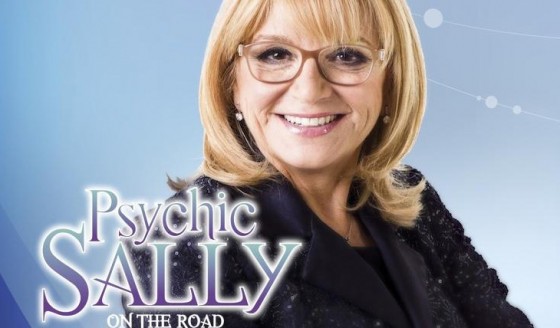 The nation’s favourite medium is back on the road and better than ever with her most jaw-­dropping show yet. In 2015 psychic Sally Morgan will be wowing sell­out crowds across the land as she displays her amazing psychic abilities.

After a headline­grabbing 2014, Sally is back where she belongs in front of live audiences, sharing her remarkable gift in a show which is unique to every venue. Funny, entertaining, sometimes heart­breaking, often controversial; P​sychic Sally on the Road 2015​marks her eighth year touring.

Possessed of an incredible ability, the former housewife from the suburbs has become a global hit and has cemented her place as the nation’s best­loved psychic with one of the most successful touring shows in the UK. She has performed in front of a combined audience of over 750,000 people in hundreds of venues.

Sally says: “I love being on the road, reaching out to my fans and comforting people about life after death. Every night when I’m on stage amazing things happen and it’s a privilege to be able to pass on messages of love and comfort to the people I share my gift with.”

Sally is the former medium to Diana, the Princess of Wales and has a long list of celebrity clients. Her TV show Sally Morgan: On the Road​ran for three series and continues to be shown around the world. In 2014 she toured Australia and will return there to tour again this summer. She is also the best­selling author of several books and is a regular guest and panellist on television shows.

Sally was born with her amazing gift and remembers a childhood full of strange goings on and interactions with spirit world. She spent years practicing as a medium from home and word spread of her remarkable talent and uncanny accuracy.

Despite never having advertised her services, she became wealthy London society’s best­kept secret and it was perhaps inevitable that with a client list that grew to include royalty and international film stars she would be noticed by the media.

Her debut ITV show, S​tar Psychic,​ gave a fresh, contemporary twist to medium ship and in 2008 she took the decision to share her gift with more people by devising a series of live shows which evolved into a sell­out national tour.

Sally is coming to Lowestoft Marina Theatre on Thursday 21st May 2015.

Sally can also been seen at:

Sally continues to tour extensively in 2015 and her new memoir, C​all Me Psychic,​will be published in the spring.