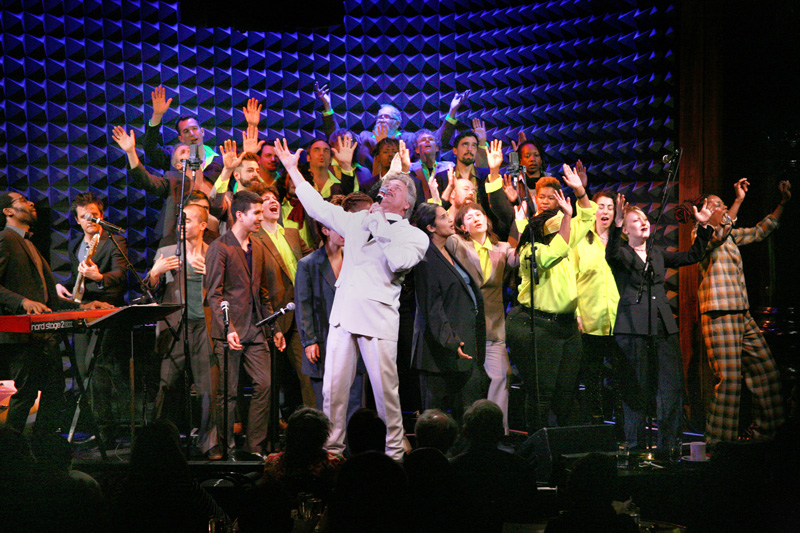 Hallelujah!  Your saviour is at hand. If you’re concerned about a wife with global advertising, multinational control, climate change, the threat of nuclear war, supermarket domination, and all the constant controversy caused by the US President’s outpourings, this is for you. If you’re not, this is REALLY for you!

Award-winning wild anti-consumerist, environmental gospel shouters and Earth-loving urban activists Reverend Billy and the Stop Shopping Choir return to the UK for a whistlestop tour of the country. They’ll be spreading the word of Earthelujah and encouraging us all to join the struggle to avert the threatened Shopacolypse. The tour comes to Norwich Arts Centre on 29 October. Expect humour, great music and an unshakeable belief.

The Church of Stop Shopping is a New York based secular political religion founded in 1999. Their performances in concert halls (and the Tesco cash tills exorcisms) are directed by Savitri D, who co-founded the ‘church’ with Talen in the months after 9/11.  www.revbilly.com

Since Trump, the Frankenstein of shopping culture, won – or stole – the election, the church has been a repository of community anguish. The choir has opened for Neil Young, been produced by Laurie Anderson, and hosted a Black Lives Matter benefit with Joan Baez as well as hosting their own parades, boycotts, and protests – all whilst singing multiple harmonies. To date they have performed in, and Billy has exorcised cash registers in, over a dozen countries and four continents.

The Rev has an advice column in a New York newspaper called ‘Trump Depression Hotline’ – and this effort to bring mindfulness and hilarity to these dark times became the name of the UK tour. ‘We gotta love everybody and show them we care ‘til they can’t Trump anymore’ he said.

Recently Billy and the choir have been ’taking the knee’ in front of Trump Tower in New York in solidarity with NFL football players and others in sport and the arts. Lewis Hamilton has said he will consider ‘taking a knee’ when the US national anthem is played prior to the US Grand Prix and stars like Stevie Wonder, Pharrell Williams, De La Soul and the Broadway cast of 1984 have all joined in. 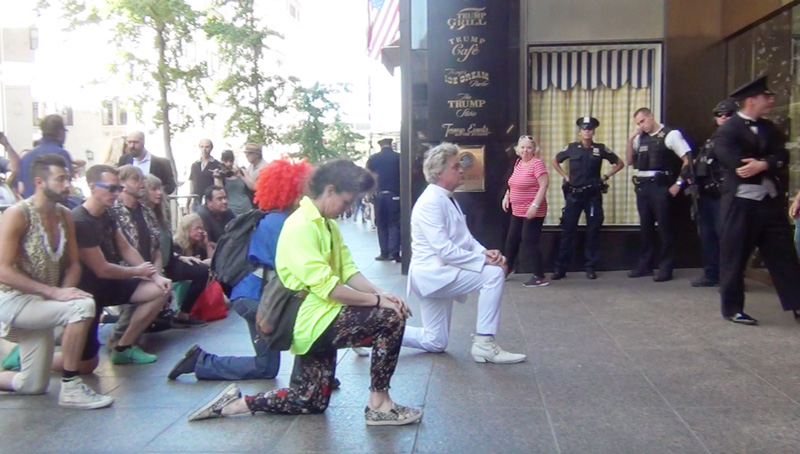 The kneeling choir, led by singers Savitri and Dragonfly, began singing the civil rights song, ‘Keep your eyes on the prize, hold on, hold on…’ During the protest, the police receded from the front doors, choosing to stand aside. Tourists declined to enter the doors during the protest with some joining in. No arrests were made.

‘We turned to face Trump’s golden doors, guarded by machine gun toting police in body armour, a dozen of us put a knee down on the sidewalk in a praying position’ said Rev Billy. ‘Then when the choir began to sing everything changed. We began to feel a deep calm, and the police and the tourists moved away from the doors. They seemed to be going into a trance with us, down into the pleasure that comes from the promise that we CAN outgrow racism. Is this what patriotism is supposed to feel like? Is this the real patriotic feeling for our country, without fear and pride, but with love for all our fellow citizens?’

See a short video of the protest below:

‘Talen’s message resonates with the words W. H. Auden wrote on the eve of World War II… “We must love one another or die.” ‘ Village Voice

Savitri D and Reverend Billy have also taken to spending time in the public garden of Trump Tower, ‘We walk past the submachine guns and dogs, the body armour and the golden name of the white supremacist president that hovers in space above the door’ said Rev Billy ‘We travel up gold-plated escalators to legally protected privately owned public space then we write together for 45 minutes. At the end we stand with our writing and recite or shout or sing our words at the 700 foot tall gold-tinted monstrosity’ added Savitri D.

‘the Church’s honesty, passion and lack of cynicism is inspiring’ The Guardian 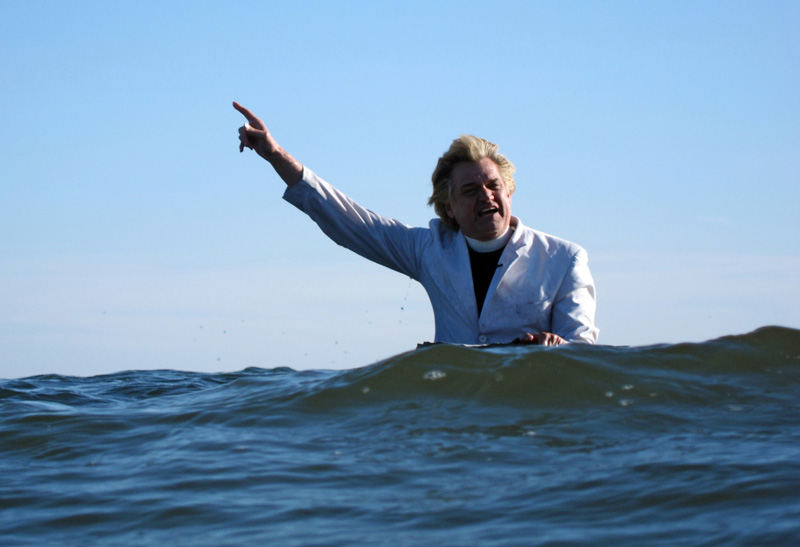 Reverend Billy Talen is an actor, performance artist and activist who began his experimental preaching in Times Square in 1994. Soon singers were accompanying his ‘retail Interventions’ inside chain stores, principal targets being Disney, GAP, Nike, and Starbucks. He is legally banned from every branch of Starbucks in the USA and the coffee giant has issued a memo to its managers ‘What should I do if Reverend Billy is in my store?’

The Church of Stop Shopping hold ‘services’ wherever they can, in theatres, churches, community centres, forests, parking lots, shopping malls, and perhaps most importantly, inside stores, as close to the cash register as they can get, within spitting distance of the point of purchase. Their feature film ‘What Would Jesus Buy’ was produced by Morgan Spurlock and their earlier film Preacher With an Unknown God won the Audience Award at the Sundance Film Festival.