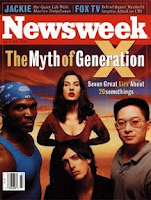 AfterShock, a major new exhibition of international contemporary art, opens at the Sainsbury Centre for Visual Arts, Norwich on Saturday 14 July and runs until Sunday 2 September. The exhibition features the work of 16 artists from countries including Argentina, India, Pakistan, the Middle East, the United Kingdom and the United States of America.

The artists use a variety of techniques to explore the images of political and social violence that confront us every day in the media, highlighting how the media condition our response to violence and affect our concern with inhumanity across the globe.

Alfredo Jaar’s Untitled (Newsweek) 1994, meditates on the world’s lack of interest in the Rwandan Genocide, until it was too late.

Thirteen years ago Rwanda’s Hutu ‘Power’ extremists attempted to wipe their Tutsi compatriots from the face of the earth. Any moderate Hutus who stood in their way were also engulfed in this holocaust. Friend murdered friend, slashing and cutting with machetes and spears. ‘Lucky’ victims paid for a quicker despatch and were shot in the head. In little more than three months, from April 6 to July 18, 1994, some 800,000 people were murdered. The killing rate was faster than the Nazis achieved in their industrial gas chambers.

In Untitled (Newsweek) 1994, Jaar shows 17 covers of Newsweek side by side with text describing what was happening in the Rwandan Genocide that week. The work powerfully portrays the lack of action taken by the West as the Rwandan nightmare unfolded and the USA became obsessed with the OJ Simpson trial.

Other works in the show range from the destruction of urban slums in Mumbai to the aftermath of 9/11 in New York, from the ‘disappeared’ of Argentina or Northern Ireland to the violence that exists on the streets of our own cities.

Francois Bucher’s work, White Balance (to think is to forget differences), is a video montage of shots of Lower Manhattan before and after the attack on 11 September 2001. Bucher provides an alternative view of 9/11, integrating his video footage with maps, web pages, press clips, texts by the artist, statistics, data, immigration identikits, scenes from Hollywood films and passages of digital scrambling.

Jitish Kallat examines the workings of the media through its own imagery. Jitish Kallat’s The Lie of the Land reworks familiar images – for those living in India – the well-planned politician’s photo opportunity, the rioting and the injured being stretchered away. He creates a unique effect by blowing the work with a vacuum cleaner running in reverse whilst the images are drying. 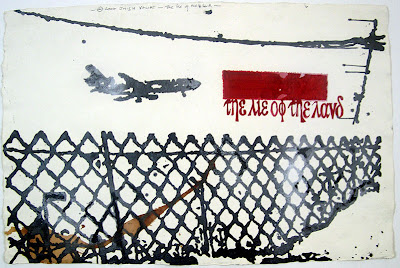 David Farrell and Fernando Traverso both produce work which relates to ‘the disappeared’. Farrell responds to the complexities surrounding ‘The Troubles’ in Northern Ireland by photographing the sites where Catholics, widely assumed to have been ‘disappeared’ by the IRA, were buried. Fernando Traverso’s photographs in the exhibition document the 350 bicycles he secretly spray-painted throughout the city of Rosario in Argentina in memory of each person who ‘disappeared’ during the military dictatorship (1976-1983).

“The artists in AfterShock have found their own strategies for depicting violence and suffering without shocking. Through video, photography and images taken from the media, they give us the voice of the individual, producing moving personal responses to the conflict and violence they have experienced, either directly or indirectly. Together, the artists show us alternative narratives, arguing that the truth is not in any single image but somewhere in between” – Yasmin Canvin, guest curator.

The exhibition is the Sainsbury Centre’s contribution to Contemporary Art Norwich 2007, a city-wide celebration of international contemporary visual arts from 14 July to 31 August.